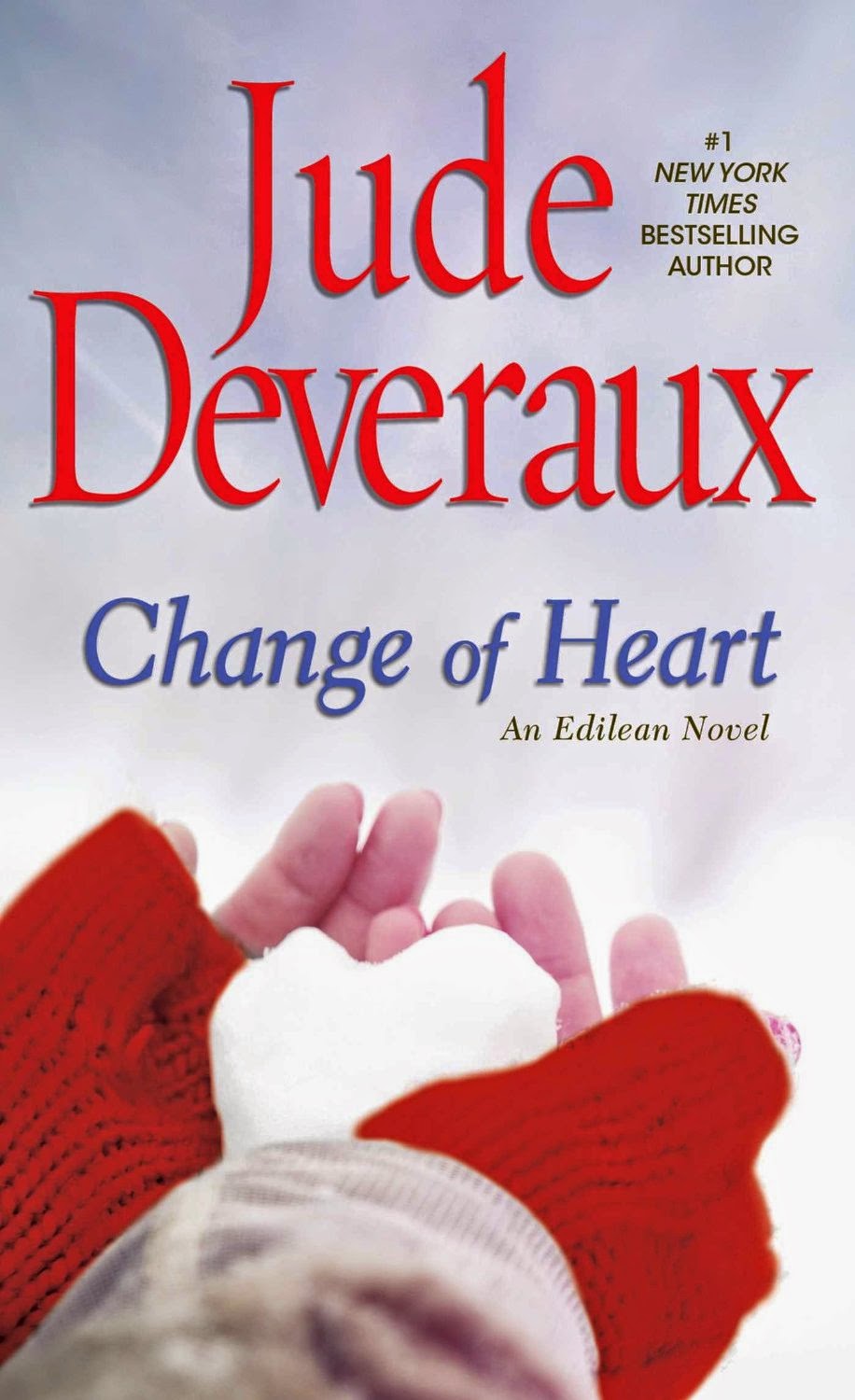 I love Jude Deveraux’s Edilean series. Okay, I grant you there are few books of Ms. Deveraux’s that didn’t work for me, but generally speaking, if we have a Taggert, Montgomery, or a character from Edilean, I’ll read the book and pass it to all my friends to read. When the book has two or more of these qualities, even better. Change of Heart has this; and is also two stories in one lovely book.

The first part of the book (story 1 as I refer to it) has classic Jude Deveraux casting: Frank Taggert and Miranda Harcourt. Frank is the brother of Mike, the hot hunky hero from Sweet Liar, whom I adored in his Happily Ever After. Frank is rather the opposite of his brother—he’s unapproachable, anti-social, and a bit of a workaholic. He is basically your standard Romantic Hero Asshat; and he’s such an arrogant little toe rag. Miranda Harcourt is sweet, innocent and entirely too likely to help a con artist with her last dollar than allow said con artist to starve. It practically says “doormat” across her forehead. Her son, Eli, despairs of leaving her to her own devices when he gets a chance to go to Princeton (at age 12, think Sheldon Cooper.) He takes care of his mother; he can’t leave her to pursue his dreams. He’s darling, even if he is a bit off-putting.

Stage: Frank is alone in a cabin in the middle of nowhere with a broken arm. Miranda is sent to be his nurse for two weeks, to give them time to fall in love. Eli is precocious…and come to think of it, so is Mike who thinks doing this to his brother is hilarious. As you might imagine, some misunderstandings occur, like Frank thinks Miranda is a hired prostitute; and Miranda thinks he’s a completely heartless, moral-less ass clown. Fortunately this is cleared up pretty quickly; and with some delightful arguments and passionate make ups, Miranda and Frank get their happily ever after.

The second part of the book is about Eli Harcourt, all grown up, and his romantic love interest in none-other than his childhood, partner-in-crime, Chelsea Hamilton. Chelsea is the beautiful daughter of an uber-rich, successful businessman; and while Eli’s issues revolve around him being a workaholic with all the social ability of his step-dad Frank, Chelsea’s issues involve being too rich and too pretty—because that’s about all she’s good for. I must applaud Ms. Deveraux for making me care about rich people and their problems—but I really liked Chelsea and hoped she’d pull herself together to see that Eli was the right guy for her.

Hellie Sinclair (a.k.a. Fran) was one of the founding members of the Romance Writer's Revenge, where she frequently got to satisfy her love of good books and her need to expound by writing reviews. Hellie loves to craft on projects she rarely finishes, watch British dramas as a sort of Olympic marathon event, and do most anything that fits the description "indolent and pleasurable." Fortunately reading falls into that category. Connect with Hellie on Facebook.

PJ here! I've been waiting for a story for Eli and Chelsea since first meeting them as children in Deveraux's short story, "Change of Heart" in the 2005 anthology, A HOLIDAY OF LOVE. What fictional children or secondary characters are you still hoping will get their own happy ending?
Posted by pjpuppymom at 12:30 AM