Review - - The Sweetness of Honey 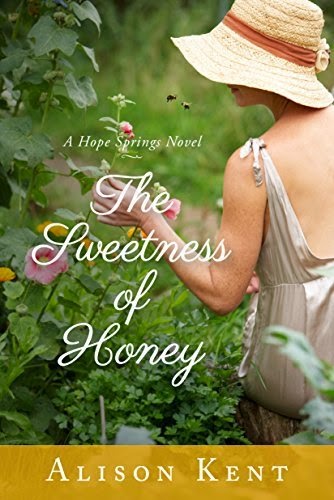 Indiana Keller had hoped that when her brother Tennessee contacted her to help Kaylie Flynn create a garden (The Second Chance Café) that she and her brother would be able to regain the closeness they shared growing up before a life-changing night that haunts all the Keller siblings, but Ten still seems distant. Motivated in significant part by her desire to lessen that distance literally, Indiana buys Hiram Glass’s property in Hope Springs, Texas, to expand her produce business, IJK Gardens, which is headquartered in a Buda, a town 40 miles away. The move enlarges more than the number of cultivated acres in Indiana’s business. Glass was a beekeeper, and so she adds beekeeping to her enterprises. She hires a private investigator to search for her other brother, Dakota, who disappeared from her life and from Tennessee’s. She also adds Ten and Kaylie’s circle of friends. Among them are the mysterious Will Bowman, one of Ten’s parolee employees, and Oliver Gatlin, member of one of the town’s wealthiest families. Both men are attracted to Indiana.

Handsome, enigmatic Will keeps his past hidden, but he makes no effort to hide his appreciation of the beautiful women of Hope Springs: Kaylie Flynn, pregnant with Tennessee Keller’s child and about to marry him; Luna Meadows, newly married to her high school love, Angelo Caffey; and the lovely Indiana, on whom all his attention is now focused. The reunion of Luna and Angelo (Beneath the Patchwork Moon) resulted in revelations that reawakened Oliver Gatlin’s grief for his brother Oscar who has lain comatose since an automobile accident eight years ago and changed the direction of his life. He too is drawn to the beauty and elusiveness of Indiana. She is aware of the special qualities of both men, uncertain of where her heart is leading and fearful that old guilt makes her undeserving of new happiness.

The Second Chance Café was five-star read for me, and I liked Beneath the Patchwork Moon almost as well. I was predisposed to like the third book since it featured a sympathetic heroine in whom I was already invested and two potential heroes whom I found interesting. But my interest in the characters was not enough to overcome my impatience with the turtle-like pace of this book. I’m a reader who appreciates quiet books, and I have favorite novels that are heavily introspective. Even so I felt that Indiana’s story was too often second-verse, same-as-the-first material, and I sometimes needed to know more about what Will and Oliver were thinking. My liking for Indiana increased, and I loved one part of the ending. I also enjoyed the appearances of the couples from the earlier books, particularly the continuation of Ten and Kaylie’s HEA. While I was frustrated because I didn’t understand some of Will’s choices, I can reluctantly accept that the questions may be necessarily delayed to be answered in a later book, but that explanation doesn’t work for Oliver.


Despite my disappointment in this particular book, I remain a Hope Springs fan. Kent is a gifted writer, and my hopes are high for at least two more books in this series. I recommend the Hope Springs series to contemporary romance fans generally and to small-town romance fans particularly. It offers a fascinating mix of characters who are refreshingly complex and original, and the second-chance theme introduced in the first book runs through the series. But I recommend you start with The Second Chance Café and Beneath the Patchwork Moon to see this author at her best. One other caveat for readers who are fans of Kent’s erotic romances, this series has a relatively mild sensuality level.