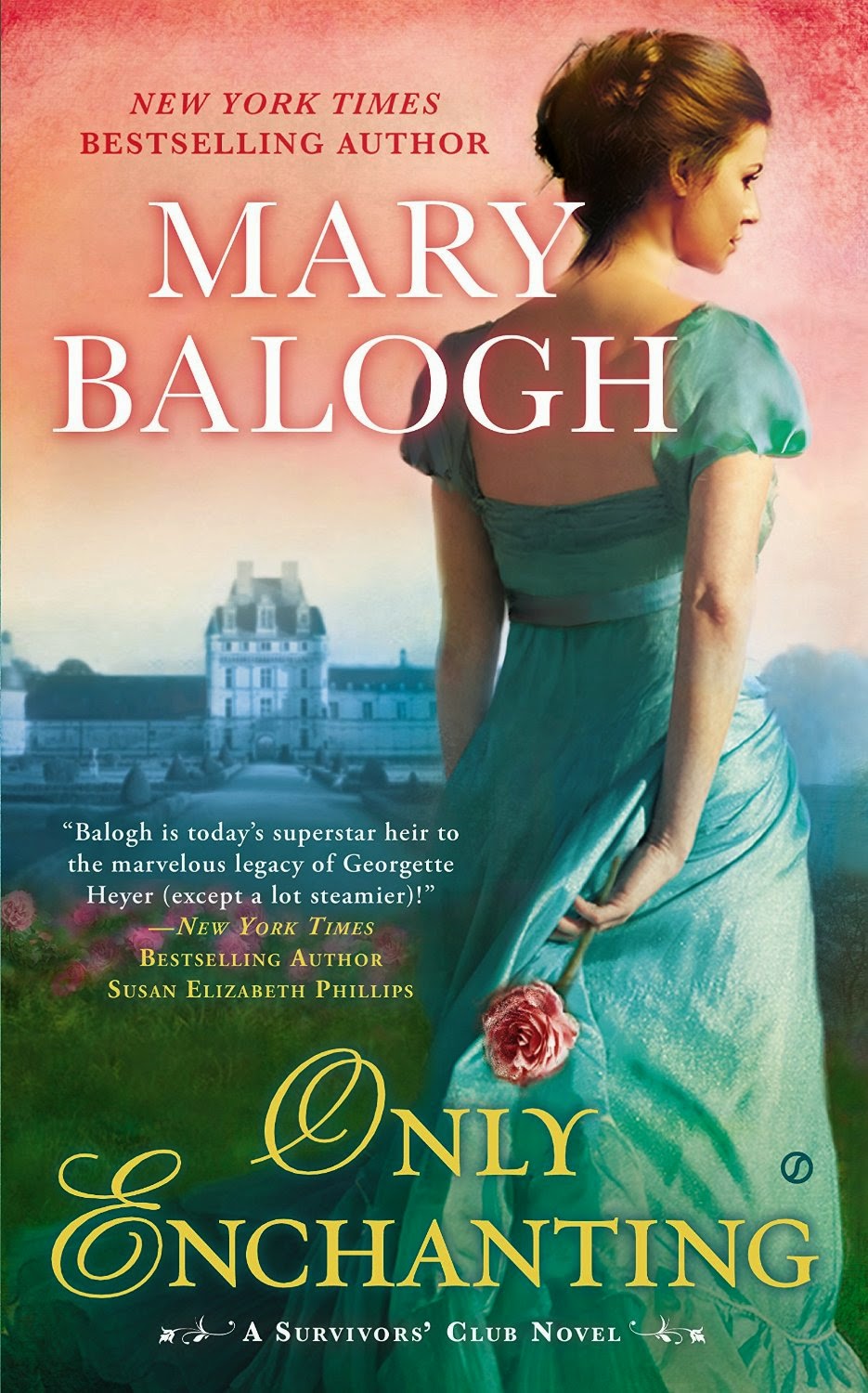 In this fourth book in Mary Balogh’s current series, the six men and one woman who make up the Survivors’ Club are gathering for their annual reunion. Since Viscount Darleigh refused to leave his wife so soon after the birth of their first child, they have moved the site of their gathering from Penderris Hall in Cornwall, the Duke of Stanbrook’s estate where they spent recovering as fully as possible from the wounds, physical and psychic, inflicted upon them by the Napoleonic Wars, to the home of Darleigh and his lady.

Flavian Arnott, Viscount Ponsonby, has an additional reason to be happy to reunite with his fellow Survivors’ Club members. The reunion allows him to avoid his mother and sister who are enthusiastically plotting another reunion, that of Flavian and his former fiancée, a widow whose year of mourning for her husband, Flavian’s former best friend, has ended. Flavian and she have a complicated history, one his family is eager to forget. But Flavian has reservations as well as some troubling gaps in his memory.

Flavian was shot in the head, tossed from his horse on his head, and ridden over by another horse. He recovered physically from his wounds, but he was left unable to think clearly and unable to communicate coherently. The gibberish he spoke and the violent outbursts that followed his fruitless attempts to make himself understood convinced his fiancée and his family that he was mad. Three years at Penderris Hall under the compassionate care of the Duke of Stanbrook restored his speech, except for a slight stammer, and his sanity, except for the memories, some unrecovered and some too clearly remembered, that keep him restless. On the surface, Flavian is a golden god of a man—tall, handsome, and fashionable with a ready charm and a quick wit. His fellow survivors know that peace for Flavian has proved elusive, but not even they know how unrelenting his demons are.

After the death of her husband three years ago, Agnes Keeping moved to Inglebrook to live with her sister, Dora, a music teacher whose students include both Vincent and Sophia, Viscount and Viscountess Darleigh. Agnes prefers her emotions contained and fears the loss of control and the resulting destruction that can accompany passion. She was genuinely fond of her staid, older husband. The quiet affection they shared was enough for her at eighteen and eight years later, she still “had never been in love or ever expected to be—or even wished to be.”

Her expectation and wishes become irrelevant when she meets Viscount Ponsonby. Against all reason, she falls in love. Flavian is more cynical about love. He is confused by his attraction to a woman he recognizes is ordinary in status and appearance, with none of the polished beauty of a fashionable lady. Yet the enchantment she stirs in him after their first waltz increases with every meeting. With her, he finds safety and peace and passion. He is persistent when she rejects his first marriage proposal. But the happiness that seems within their grasp in the early days of their marriage is threatened by their past that intrudes on the present. Claiming their HEA will require courage and commitment.

Nobody is better than Balogh at creating a character-driven story that showcases richly developed, achingly vulnerable characters. Only Enchanting may be a degree less compelling than the first two books in this series, but it is a poignant story with a hero and heroine who leave readers sighing with satisfaction over their HEA. Readers who have followed the series will enjoy the glimpses provided of couples from the earlier books. One of my favorite moments was a tender scene between Vincent and Sophia and the revealing reactions it evoked in Agnes and Flavian. This book left me hungry to reread the first four books in one marathon read and eager for Only a Promise, Ralph Stockwood’s story (May 5, 2015).

If you like historical romance that focuses on the central relationship with enough context to give complexity but with nothing to distract from the hero and heroine, I recommend this book. Balogh has been producing keepers for almost thirty years, and with three more Survivors’ Club books to go, the future looks promising for more treasures from this prolific author.