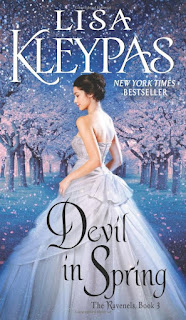 An eccentric wallflower  . . .
Most debutantes dream of finding a husband. Lady Pandora Ravenel has different plans. The ambitious young beauty would much rather stay at home and plot out her new board game business than take part in the London Season. But one night at a glittering society ball, she’s ensnared in a scandal with a wickedly handsome stranger.
A cynical rake  . . .
After years of evading marital traps with ease, Gabriel, Lord St. Vincent, has finally been caught by a rebellious girl who couldn’t be less suitable. In fact, she wants nothing to do with him. But Gabriel finds the high-spirited Pandora irresistible. He’ll do whatever it takes to possess her, even if their marriage of convenience turns out to be the devil’s own bargain.
A perilous plot  . . .
After succumbing to Gabriel’s skilled and sensuous persuasion, Pandora agrees to become his bride. But soon she discovers that her entrepreneurial endeavors have accidentally involved her in a dangerous conspiracy—and only her husband can keep her safe. As Gabriel protects her from their unknown adversaries, they realize their devil’s bargain may just turn out to be a match made in heaven . . .

Lisa Kleypas's Devil in Winter, book 3 in her Wallflowers series, is one of my favorite Kleypas novels, telling the story of one of my all-time favorite couples, Evie and Sebastian, Lord St. Vincent.  It's understandable then that when I began reading Devil in Spring, the story of Evie and Sebastian's son Gabriel and another wallflower, Lady Pandora Ravenel, my expectations would be high. By the end of the first chapter, I was certain those expectations would not only be met but far exceeded.

Gabriel, the current Lord St. Vincent didn't fall far from the family tree, inheriting his mother's kindness and strong sense of responsibility along with his father's charm and golden good looks. His path most likely never would have crossed with Pandora's had he not come to her rescue when she becomes entangled in the furniture in the hilarious opening chapter of this story. His honor compels him to do the right thing but it isn't long before he's intrigued by this unusual young woman who is his intended. However, she's so far removed from the society wife he had envisioned she may as well be from another universe. Then there's the dark secret he carries that makes it impossible for him to believe they could ever be truly happy together. I fell in love with Gabriel right along with Pandora. I loved that he was attentive and caring enough to discover hidden facets of Pandora that even her own family hadn't guessed. He was everything I had hoped he would be and, as a bonus, I was thrilled that we got to see him interact with his close-knit family.

Pandora is that rare creature who has zero interest in a London Season and marriage. A brilliant young woman who was raised far from society by negligent parents, her life is focused on becoming a successful, independent businesswoman producing the games she creates and intends to sell at her brother-in-law's store. She's not about to hand control of her business and the money she earns over to a husband, even one who seems to see and appreciate her for who she really is. She's a breath of fresh air and an absolute delight but also unpolished, outspoken, clumsy (though there's a hidden medical reason for that), quirky, with a tendency to make up amusing words (swirladingles, anyone?), and easily distracted (I sense that in today's world she would be classified as ADHD). I found her funny, smart, vulnerable, determined, and endearing. Here's a small example of what makes Pandora such a delight, taken from her journal entries during a train journey to spend time getting to know Gabriel and his family:

#1 If people think you're dishonored, it's no different from actually having been dishonored, except you still don't know anything.

#2 When you've been ruined, there are only two options: death or marriage

#3 Since I am gravely healthy, the first option isn't likely.

#4 On the other hand, ritual self-sacrifice in Iceland cannot be ruled out.

I adored this story. There's no other way to put it. It made me laugh, made me sigh, and kept me smiling throughout. It's vintage Kleypas, filled with the swoon-worthy, heart-tugging romance, witty banter, humor, and emotion that made me fall in love with her historical romances years ago. I couldn't turn the pages fast enough, highlighting more passages that I wanted to remember in the first two chapters than I usually do in full novels. It's a keeper that I will undoubtedly be re-reading time and again and would have been a Top Dish review if not for one issue. The last quarter or so of the book introduces a suspense plot that was a bit jarring in its disconnect from the rest of the book; not enough to take me out of the story completely but enough to make me stop and wonder about the shift. I was so in love with these characters and their journey to love by that point that I was willing to go wherever Kleypas took them but it did disrupt the flow of the story for me enough to scale my rating back from a Top Dish to a 5-Star review. Still, Devil in Spring is a wonderful book that I highly recommend. It's earned a spot on my Best of 2017 book list as well as a place of honor on my All-Time Favorite Comfort Reads keeper shelf. I'm looking forward to more books in this series and am hoping that Gabriel's widowed sister, Phoebe is in line for a story of her own. More page time for Evie and Sebastian would, of course, be much appreciated!

Do you ever make up words?

What's the last book that made it to your keeper shelf?

Do you enjoy second generation stories?

Have you read Devil in Spring yet? How about Devil in Winter? What did you think?

One randomly chosen person leaving a comment before 11:00PM EST, March 12, 2017 will receive a signed print copy of Devil in Spring. U.S. and Canadian addresses only.