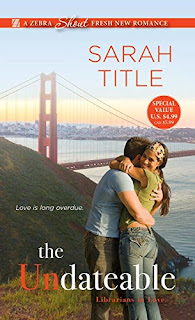 Melissa Bernard, affectionately known as “Bernie,” loves her job as a librarian at Richmond College, a small institution in the San Francisco Bay Area. She enjoys her work supervising the undergraduates who work in the library and helping desperate students with their research projects. But she is less than thrilled when Carly, her favorite student assistant, and Carly’s boyfriend dance on the reference desk as the center of a flash mob. In fact, Bernie isn’t sure whether she disapproves more of the flash mob in the library or of Carly accepting the boyfriend’s proposal. She considers them far too young for marriage. Unfortunately for Bernie, her disapproval is written clearly on her face, and her face is prominently displayed in a video that goes viral. Bernie is overwhelmed when she becomes a meme. The Disapproving Librarian Disapproves is everywhere, including on posters and bookmarks ordered by the Director of Libraries, who is delighted with the development, despite its reinforcement of a negative stereotype of librarians. Bernie’s immediate supervisor convinces her to take her accumulated leave and allow the frenzy surrounding the meme to fade.

Colin Rodriguez is sharing his parents’ Bay Area home with his sister, and only parental stipulation that he must have a paying job to continue living there rent free pushes him into finding a job. He becomes a staff writer for Glaze.com, an online fashion magazine. As the sole straight male on the staff, he is charged with offering the male perspective. With a younger, female colleague eager to claim his position as senior staff writer, he needs to convince the Disapproving Librarian to agree to a makeover by the experts at Glaze and thirty Glaze-arranged dates in thirty dates. Colin will cover the dates for the magazine, and in the process, prove that Bernie, contrary to the reputation she has gained, is not undateable.

Bernie, whose makeup routine and sense of fashion are nonexistent, initially refuses. In the first place, she is uninterested in what Glaze is offering, and, secondly, she thinks agreeing will mean selling out her feminist convictions. But arguing with Colin is more fun than she expected, and her friends push her to go for it. Still wary, she finally agrees. The first dates are disasters, but as Bernie adapts to the makeover and to dating, they improve to a degree. If the best part of the experience for her and for Colin is their verbal duels before and after the dates, neither of them is ready to admit it—not even to themselves.

Sarah Title uses her first-hand knowledge of librarians, the power of the online world, and a pair of engaging leads to create a romance that is truly contemporary, laugh-out-loud funny, and frankly feminist. Bernie’s dates—from the self-infatuated pontificator to the poet fixated on his ex and his mother to the nice guy who strikes no sparks—will be familiar to many readers. Watching Bernie and Colin fall in love is a delight, and Maria, Colin’s snarky, blogging alter ego whose advice sounds more and more like Bernie, adds to the fun.

After reading Practice Makes Perfect, I considered Sarah Title one of my top new-to-me authors of 2016. I had high expectations for The Undateable, and it was even better than I expected. From Maria’s opening letter through the epilogue, I was invested in the characters and their story. Bernie is one of my favorite contemporary heroines ever. I loved her honesty and her wit and her insecurities. I cheered when she said things I wish I had been brave enough to say when I was young. I also liked that although she changes in some ways during her thirty-day experience, the core of who she is remains unchanged, and it that unchanging Bernie with whom Colin falls in love. It is Bernie and his love for her that motivates Colin to grow up. That too merited cheers.

If you like romances with wit and humor and characters as entertaining and endearing as those in your favorite sit-com, I think you will like this book. I highly recommend it. Now I’ll return to my celebration that The Undateable is the first in a series. The second Librarians in Love book, Falling for Trouble, releases June 27, and the third, Laws of Attraction, will be available October 31. I’ve added both to my must-read list.