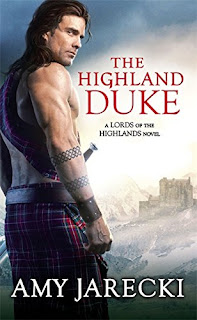 Set in the early 18th century during the first Jacobite rebellion, Amy Jarecki’s new series, Lords of the Highlands, The Highland Duke features a lord and servant type of trope with a born-and-raised wealthy chieftain lord and a poor gypsy healer. Geordie, the Duke of Gordon, is wounded in a Jacobite skirmish and Akira, the tinker-healer, saves him and then agrees to continue to treat him until he’s safe back at his Highland home for the exorbitant price of ten shillings. They are from completely different worlds, but are drawn to each other despite the obvious heartbreak headed their way should they give into their desires for each other.

On their heels is an English redcoat (think of Black Jack Randall from Outlander), and Geordie and Akira have to depend on each other to reach his home in safety. Once safely there, Geordie insists on having her escorted back home; however, by now Akira is also being hunted by the men who want to find a traitorous Highland lord part of the Jacobite rebellion--and the traitorous wench who helped the one they had escape. Capturing one such as Geordie will result in wealth, prestige, and lands for someone like the redcoat who hunts him...or even Geordie’s frenemy, the Duke of Atholl.

In addition to these complications, when the couple does admit their love for each other, getting married would be impossible. For one, a duke does not marry a impoverished gypsy, even if he has wealth enough for that aspect not to matter. Marrying a gypsy would be the equivalent of interracial marriage in the 1950s: illegal and unheard of by those with titles. In addition, the duke is divorced from his first wife and a divorce in this time period does not allow for a second marriage, while the first wife is still living.

Full of action and dark complications, The Highland Duke will likely engage readers who enjoy highlander romances and may especially enjoy one set in a time period a little different than the usual mid-1800s or post-Culloden or pre-Scottish Independence. Both characters are likeable and complex, but at times, I felt the romance seemed a bit pushed. (I myself do not like romantic interludes that happen either during or right after one has been escaping for their lives--I don’t think that is the time. However, that is my particular preference. Also as a preference, I’m not keen on the lord and servant trope simply because that kind of power-struggle and the historical/societal attitudes make it hard for me to believe they’d be overcome.) However, Jarecki does a sufficient job showing the evolution of the duke’s struggles in just these areas so one could believe for this couple, a happily ever after was the logical conclusion. And the heroine’s strength of character to not accept less than an honorable relationship is also admirable and made the character a very “rootable” character.

If you can still read books without picking apart plots or characterization* (you lucky thing), this book may rate even higher for you. Jarecki has an excellent author’s note at the end, explaining where she got the idea and what liberties she took when writing. If you don’t care about any of that, then welcome to another delicious series of heroes in kilts!

I do have to say, the final escape scene of near certain death alone makes this novel worth reading. Hilarious and action-packed. Enjoy!

*I was a history minor (junkie) in college and I annoy the crap out of my friends with historical detail that no one likes to focus on, let alone think about in regards to romance. It’s helpful in Trivia Pursuit, unhelpful when it comes to reading a lot of fiction...or conversing with most teenagers.
Posted by pjpuppymom at 12:00 AM