On Second Thought - - Silk and Shadows 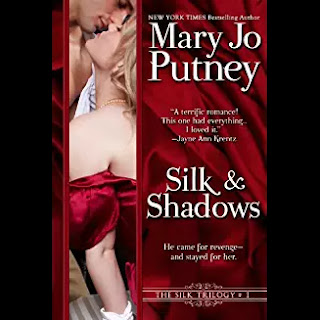 Recently, I did my part to see that romance readers knew that the ebook of Silk and Shadows, the first book in Mary Jo Putney’s Silk trilogy, was available free. A week or so before the sale, I recommended the trilogy in a FB conversation with Miranda Neville. Of course, all this attention stirred a longing to reread the books. I did, and fell more deeply in love with the characters than I did when I first encountered them more than twenty-five years ago. Silk and Shadows not only introduces the trilogy; it is also my favorite of the three.

The prologue introduces the hero, Mikhal Khanauri, or “Peregrine, the wanderer,” who has just arrived in London. The year is 1839, and Peregrine is ready to set in place a plot for revenge that has consumed him for most of his life.

The flame of hatred had been fired when he was a boy of ten, and over the years he had tended it with black bitter care. Waiting and preparing for his revenge had been a strange mixture of pleasure and pain. He has wandered the face of the earth, acquiring wealth in many ways, honing mind and body until he was a more deadly weapon than any knife or rifle, learning how to survive and prosper in any land, among any people. Every skill, every golden coin, every sharpening of wit and hand, had been treasured as another step toward his ultimate goal.

Because Peregrine twice saved the life of Lord Ross Carlisle, author, younger son of a duke, and another who has traveled widely, he has an entrée into London society that his wealth alone would not have given him. Ross introduces him as Prince Peregrine from the mysterious country Kafiristan. Peregrine’s exoticism, his obvious wealth, and his impressive physical presence make him one of the season’s most popular guests. Ross also introduces Peregrine to Lady Sara St. James, only daughter of the Duke of Haddonfield. Lady Sara, first cousin to Ross, has just accepted the marriage proposal of a wealthy baronet, Sir Charles Weldon.

Weldon is the man whom Peregrine has targeted for destruction. Although the reader remains ignorant of the reasons for Peregrine’s hatred of Weldon until well into the book, enough of the baronet’s character is revealed to understand that he is a hypocrite steeped in evil, exploitive practices. For example, part of his fortune comes from brothels he owns, including one that provides underage virgins.

Peregrine’s plan is to destroy Weldon financially and socially before killing him. In order to do this, Peregrine must end the betrothal between Weldon and Lady Sarah, who will bring a large dowry to her marriage. He chooses to do this by arranging for Ross and Weldon to walk in on his seduction of Sara. Marriage to Sara is not part of Peregrine’s plan, yet he finds himself proposing that they wed. Sara has fallen in love with Peregrine, but she is remarkably clear-headed in her view of him. But when she realizes that Peregrine’s vengeance will not only destroy his enemy but hurt innocent people, she leaves him. Peregrine must choose between revenge and love.

Mary Jo Putney has been one of my favorite authors since very early in her career. I love her heroes, but she has created more of my favorite heroines than any other single author. No one is better at drawing a heroine who is both genuinely good and deeply passionate. Sara is one of these heroines. Her faith is not a matter of words spoken or rituals observed but rather of the way she lives her life. Her integrity holds even through choices that are painful for her. She marries Peregrine in the face of her father’s disapproval, and she leaves Peregrine even though doing so means heartbreak for her. Although Peregrine brings change to Sara’s life and challenges her to grow in significant ways, he is the character who changes most fundamentally and whose growth is greatest. His hatred for Weldon is understandable, but Peregrine finally understands that to be possessed by hatred diminishes one’s own humanity.

MJP also avoids the one-dimensional villain. Weldon is truly evil, but he is credibly evil because his errors stem from pride and selfishness, the most human of flaws. He also has one redeeming quality that ultimately leads him to a choice motivated, at least in part, by unselfishness. He is thus more complex and interesting than a character portrayed as Evil Incarnate. Weldon also is the vehicle through which Putney reveals the darker side of life in Victorian London. One of my favorite parts of the novel is the secondary romance between Jenny, a young girl Peregrine rescues from the virgin brothel, and Benjamin Slade, Peregrine’s trusted lawyer. Jenny’s courage and Benjamin’s ability to recognize her essential innocence and goodness rather than labeling her based on her experience sounds another redemptive note in the novel.

If you like romance that features characters whose bodies, minds, and spirits are all part of their development, romance that shows gritty edges beyond afternoon teas and fancy balls, romance that will leave you considering the human spirit, I highly recommend Silk and Shadows. If you have read it before, I suspect you will find a rereading as immersing and rewarding as I did.

I also recommend the other books in the trilogy. Silk and Secrets (1992) is a tale of reunited lovers who have been separated for twelve years. The reunion takes place in Persia when warriors who owe allegiance to Juliet Cameron rescue Lord Ross Carlisle, an Indiana Jones type, from Turkoman raiders. The third book, Veils of Silk (1992), is a marriage of convenience story set in India. The hero, Major Ian Cameron, is a Scotsman, an army officer horrifically imprisoned in Central Asia; the heroine, Laura Stephenson, born Larissa Alexandrovna Karelian, is the daughter of Russian aristocrats. The Silk Trilogy is not as widely beloved as Putney’s The Rake or the Fallen Angels books, but all three books are marked with this author’s usual excellence and a touch of the exotic. They are romantic in the fullest sense of that word.
Posted by pjpuppymom at 12:00 AM