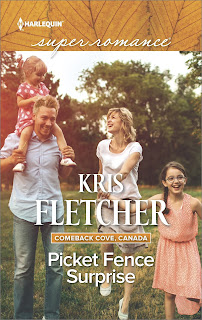 Heather Jacobs knows how lucky she is to have a second chance to be the mother her ten-year-old daughter Millie needs her to be. The fears and insecurities that she inherited from her own troubled childhood sent her running from Hank North and their daughter when Millie was a toddler. Heather spent nine years learning to be a good parent, and she is grateful that Hank, now married to Brynn Catalano and the father of an infant son (Dating a Single Dad), agrees to share Millie with her. She is also eager for more time with her daughter, something Millie wants as well. Heather cannot allow herself to be distracted by her attraction to Xander Sorenson. He is a great friend and, like her, he is a part-time parent to a daughter he adores. They also have in common their awkward position as exes who have been welcomed into the large, lively, loving North family by virtue of their children. But Heather has no room in her life for romance.

Xander Sorenson cherishes his time with two-year-old Cady, but he wants the kind of life his friend Ian North has found with Cady’s mother, Darcy Maguire (A Family Come True). Xander understands that the mistake in his past cannot be eradicated, but he is committed to building a new life for himself. Cady is a big part of that life and always will be, but he longs for a wife and sisters and brothers for Cady. The chemistry is right with Heather Jacobs but the signals she sends are confusing. Just when it seems that the two of them have a shot at their own HEA, Xander’s past collides with Heather’s past. The collision has Heather reconstructing barriers to protect herself and her life with Millie, but pushing Xander away is not as simple as she thought.

Kris Fletcher takes minor characters with major mistakes in their pasts from two earlier Comeback Cove, Canada books and gives her readers a double second-chance story in this fifth book in the series. Heather and Xander have both grown and changed from the young adults who made bad choices that affected their own lives and the lives of others, but their pasts are still part of them and still affect their lives. They are likeable but flawed characters. Because of their flaws, it takes some tough talk from people who know them well to move them past the black moment. One of the trademarks of Fletcher’s novels is the central role of family dynamics in her tales, and Picket Fence Surprise is no exception. Family in this book is a far cry from the conventional nuclear family; it is a messy mix that reflects the reality of many families in the twenty-first century. Not only Heather and Xander but also the kids and other secondary characters have an appealing credibility and genuineness.  Even the nearly impossible becomes believable in Fletcher’s deft hands.

If you are not a reader of Harlequin’s Superromance line, you may be surprised to find that they are as complex as contemporary single-titles and roughly equivalent in length. Kris Fletcher’s gifts for character development and authentic dialogue have made her one of my favorites in this line. I have a particular affection for the Comeback Cove books which began in 2013 with A Better Father. If you like contemporary romance with strong family connections that avoids clichéd situations, I recommend Picket Fence Surprise. You may find, as I did, that Kris Fletcher is an author who leaves you looking for more of her books.
Posted by pjpuppymom at 12:00 AM