Reviews - - Close to Home and Home at Last 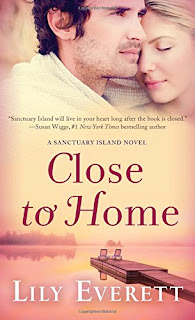 Johnny Alexander completed an eighteen-month deep undercover assignment for the Bureau of Alcohol, Tobacco, and Firearms scarred by the experience and still on edge from the danger, but eager to see his wife Theresa. Instead of the anticipated reunion, however, he is given a Dear Johnny letter and divorce papers.  The letter tells him that Terri, although grateful for all he has done for her and with no regrets for their years together, believes they both deserve more than their marriage offers them. Johnny’s only thought is to find Terri and make sure she is safe. His ATF handler agrees to give Johnny the information he needs if Johnny, who has been resistant to the idea of talking to a psychologist, agrees to therapy. Both Theresa and the therapy can be found on Sanctuary Island.

At seventeen, Theresa Mulligan fled the religious commune where she was raised, determined to somehow find the medical help her rigidly patriarchal father refused to allow her to receive. Twenty-two-year-old Johnny Alexander found her hiding in a barn. He has his own, deeply rooted reasons for needing to save her, and he offers to marry her so that she will have health insurance to pay for medical care. For eight years, she is Johnny’s wife in name only. Between his military service and later his duties as an ATF agent, the two spend limited time together, but during that time, Terri remains as untouched as she was at seventeen. Leaving Johnny and striking out on her own was not an easy decision, but it was a necessary one. In the year she has lived on Sanctuary Island, Theresa Alexander has forged a new identity for herself. She has a new hairstyle, a job she loves at Patty Cakes bakery, and a new name--Tessa Alexander. Tessa has become part of the Sanctuary Island community, and as much as she loves Johnny, she has no interest in returning to the life they have shared.

Johnny may be surprised by the changes that have taken place in his wife, but they do not affect his commitment to her or his determination to preserve their marriage. Tessa’s love for Johnny has never been in question. So, when he proposes couples therapy, Tessa agrees. But someone is determined to destroy their chance for happiness.

Close to Home is the fifth book in Everett’s Sanctuary Island series, but it is only loosely connected to the earlier books and can easily be read as a standalone. The marriage-in-trouble trope is one of my favorite tropes, and this book offers an interesting twist on it. I admit that I am skeptical of the virgin bride in contemporary romance—especially after eight years of marriage—but Everett makes Tessa’s innocence plausible by revealing the damage Tessa and Johnny have suffered, their youth at the time of their marriage, and all the time they spent apart due to Johnny’s career choices. I was invested in these characters and rooting for their HEA, but I would have been happier to have seen more complexity in their emotional growth rather than the suspense thread, which, despite the interesting twist, held little appeal for me.

There is a secondary romance involving two natives of the island, Marcus Beckett and Quinn Harper, to which I had mixed reactions. I am intrigued by the characters and their relationship, which will be further explored in Home at Last (March 7, 2017). At the same time, I felt that Marcus and Quinn’s relationship was sometimes distracting when I wanted to see more of Tessa and Johnny.

If you have read earlier Sanctuary Island novels, I think you will enjoy another visit to the community. If you are a fan of second-chance-at-love stories, this one provides a different take on that popular trope even as it offers another example of why Sanctuary Island deserves its name. I don’t think this is the best book in the series, but it is a heartwarming read that is an enjoyable, if imperfect, addition to a solid series. 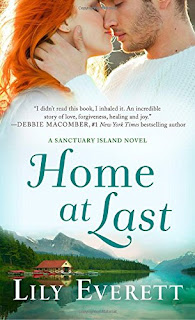 Marcus Beckett returned to Sanctuary Island after fourteen years living a life away from the island, a life very different from the one his parents had envisioned for him. With his mother dead and his father no longer a part of his life, Marcus has no ties to the island. Yet it is where he came when his life feel apart a second time. However, he is beginning to wonder if he made a mistake. He is certain that he made a mistake beginning a relationship with sunny-natured Quinn Harper, a decade his junior, his former next-door neighbor, and a favorite with Sanctuary Island residents. So beloved is Quinn that Marcus’s breakup with her is all the reason people need to boycott Marcus’s Buttercup Inn. His customers have dwindled to so few that it is scarcely worth opening the doors of the bar.

After a series of false starts, Quinn believes that she has finally found what she is supposed to do with her life through her work with the Windy Corner Therapeutic Riding Center. But her work is the only area of her life that is going well. Her heart is still hurting from Marcus’s unceremonious dumping, and she is worried about her parents who are talking about selling the family home and whose marriage seems so troubled that Quinn fears they won’t last to celebrate their thirtieth wedding anniversary that is only a month away.

In an attempt to assure her parents that her life is on track and they need have no concern for her, Quinn tells them about her job and about her “serious boyfriend.” The latter she has created out of desperation, but she persuades Marcus to be her fake boyfriend for a month. His presence will convince her parents that they can concentrate on their own relationship without worrying about Quinn, and the townspeople will forgive Marcus and end the boycott if they believe he and Quinn are together again.

But what was supposed to be a win-win situation grows increasingly complicated. Soon there is a fake engagement, although Marcus and Quinn’s feelings for each other are anything but fake. Quinn believes that the kind-hearted boy who was her pre-teen crush still exists beneath the face of cynical grump that Marcus shows to the world. Dr. Bob, her mother’s relationship guru, may be as fake as the mustache of the villain in an old-fashioned melodrama, but the threat to the Harpers’ marriage is very real. It will take the revelation of secrets and lies to distinguish the false from the genuine and clear the way for these characters to find the happiness they deserve.

The sixth book in Everett’s Sanctuary Island series follows last month’s Close to Home in which Marcus and Quinn were introduced and their heated affair begun. I like the Sanctuary Island setting, and the suggestion that runs through the series that the island is a place of refuge and healing. Marcus has a lot of baggage, some from dealing with his mother’s death when he was still quite young and the subsequent estrangement from his father and some from losses he has experienced since then. Quinn, on the other hand, has led a rather sheltered life and seems younger than her years. It is the experience gap and the personality differences between sweet-hearted Quinn and curmudgeonly Marcus that form the real barrier between the two rather than the ten-year difference in their ages. I found the references to the age difference irritating. It is not as if Quinn were eighteen. She is in her mid-twenties, and no one other than Marcus (except perhaps Quinn’s dad to a far lesser degree) appears to be bothered by the age difference. It is a minor point, but it pulled me out of the story several times. Despite my irritation with this issue, I liked Marcus and Quinn and rooted for their HEA. The secondary plot involving Quinn’s parents is interesting and highly relevant given the increase in the divorce rate among older couples. The stress Paul Harper’s retirement put on the marriage and Ingrid’s dissatisfaction with the status quo also fit the real pattern. However, I thought their struggles were sufficient without the addition of the smarmy Dr. Bob, who seemed more gimmick than credible character.

Overall, this is not the strongest book in the series, but the dimensional major characters, the emotional punch of the story, and an appealing mix of humor and sexy scenes outweigh the flaws. If you have liked the other Sanctuary Island books, you will likely enjoy this one too. If you are new to Everett, you will find enough to like in Home at Last to understand why readers eagerly return to Sanctuary Island.