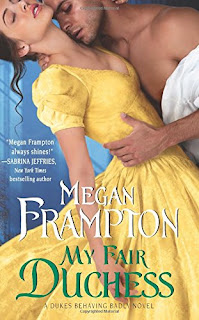 Genevieve, the new Duchess of Blakesley, is that rare creature, a duchess in her own right rather than by virtue of marriage. Because she grew up on one of her father’s country estates, loved by her servants but isolated from her father’s life and from the society to which she belonged by birth, she is unprepared for the responsibilities that come with her title. Even though it is common knowledge that her family is one of the few that has been granted permission for the duchy to descend through the female line if there is no direct male heir, no one bothered training Genevieve for the role she would someday inherit. Conscientious though clueless about being a duchess and determined not to fail, she writes her godmother for help.

Mr. Archibald Salisbury, third son of a viscount, war hero, and eye candy for females in his vicinity, is employed as a steward for Lady Sophia, Genevieve’s godmother. Lady Sophia responds to Genevieve’s plea for help by sending Archie to take charge of duchess training. Estranged from his family, Archie is not pleased by an assignment that sends him to London where the chances of meeting them are high. He is also convinced that the duchess will prove to be yet another flighty female aristocrat, but he agrees to take on the task, expecting it to be not much different from his military experience training raw recruits.

The attraction between Genevieve and Archie is immediate, mutual, and potent. What follows is a sort of double life: one in which Mr. Salisbury helps her grace acquire the knowledge of estate management, the social skills, and the proper air of superiority that are essential to her becoming a successful duchess; another in which Archie and Genevieve exchange heated glances, warm words, and occasional sizzling kisses. Throughout the mix, the two gradually become friends, and their love for one another, unarticulated but genuine, becomes as strong as the lust that flares from the beginning. However, despite their emotional and physical compatibility, the gap between an estranged third son of a low-ranking noble and a wealthy, powerful duchess is enormous. Neither Archie or Genevieve think it can be bridged, but they discover that the heart is not ruled by reason.

This is the fifth book in Frampton’s deliciously witty Dukes Behaving Badly series. I love that one of the dukes is a duchess with ducal powers (although it is her father who truly was a badly behaved duke). I love that this is an adaptation of the Pygmalion myth. I love the prefatory letters, especially the unsent ones. Most of all, I love the gender reversal that runs through the novel. It is present in obvious ways such as Genevieve’s being the one with position and power that is thought of as exclusive to males and in Archie’s being not just a servant but a gently bred character forced into servitude by circumstances. (Honestly, how many historical romances have you read in which the heroine, often a governess, faces exactly these circumstances?) But gender reversal is also present in subtler forms such as Archie’s estrangement from his family because of his refusal to marry a wealthy bride and in Genevieve’s proposition and its consequences. The story is smart and funny, and though the humor is gentle, its points are sharp. That Frampton could hone the points without damaging the novel’s lightness or losing reader sympathy for her endearing protagonists is a measure of her gift.


All that kept My Fair Duchess from being a five-star read for me is the conclusion. It just ended too quickly. I know many romance readers dislike epilogues, but I needed one here to feel fully satisfied as I bid farewell to Archie and Genevieve. Nevertheless, that lack was not enough to prevent my labeling the book as a keeper. If you like historical romance that is intelligent, sexy, and tender, I highly recommend this one. And if Megan Frampton ever decides to give her readers a short story, I hope it will be Archie and Genevieve’s epilogue.
Posted by pjpuppymom at 2:00 AM