Review - - All the Feels

All the Feels: A Novel
by Olivia Dade
Publisher: Avon
Release Date: October 26, 2021*
*Moved to November 16, 2021 because of
supply chain issues
Reviewed by PJ 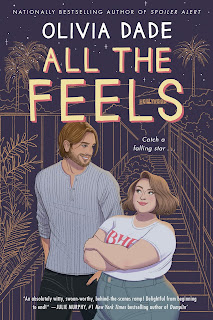 Alexander Woodroe has it all. Charm. Sex appeal. Wealth. Fame. A starring role as Cupid on TV’s biggest show, Gods of the Gates. But the showrunners have wrecked his character, he's dogged by old demons, and his post-show future remains uncertain. When all that reckless emotion explodes into a bar fight, the tabloids and public agree: his star is falling.

Enter Lauren Clegg, the former ER therapist hired to keep him in line. Compared to her previous work, watching over handsome but impulsive Alex shouldn’t be especially difficult. But the more time they spend together, the harder it gets to keep her professional remove and her heart intact, especially when she discovers the reasons behind his recklessness…not to mention his Cupid fanfiction habit.

When another scandal lands Alex in major hot water and costs Lauren her job, she’ll have to choose between protecting him and offering him what he really wants—her. But he’s determined to keep his improbably short, impossibly stubborn, and extremely endearing minder in his life any way he can. And on a road trip up the California coast together, he intends to show her exactly what a falling star will do to catch the woman he loves: anything at all.

To the outside world, Lauren and Alex together are inexplicable. He's tall, muscular, charming, and gorgeous. She's short (like, really short) and plus-size, with bird-like features (Alex's description which takes on an unexpected meaning later in the story). Fans fawn over him while those in control of his career treat him like he's a misbehaving child. As for Lauren, she's either ignored or worse, treated with cruelty and disdain. How the two of them respond to those situations (both their own and each others) couldn't be more different. It opens a window into their feelings, their self-worth, and how each of them sees themselves and each other.

I cannot begin to tell you how much I liked Lauren...or how much my heart ached for her. She's smart, accomplished, pragmatic, funny, a wonderful friend, and could give a flip what others say about her. But she's also been pushed down so many times, subjected to so much casual cruelty that she believes her worth is actually less than others. Some of her scenes are very uncomfortable and, unfortunately, all too realistic, providing a lens into how too many treat those who are "different." But, oh, what a joy it was to watch her evolve and take control as she finally begins to understand and accept her worth.

Alex is like a cross between an adorable but mischievous Golden Retriever puppy with the attention span of --- squirrel! --- and an attention-seeking, occasionally annoying house cat. I could not love him more. He's rich, successful, and appears to have everything yet there are hidden layers that have a significant impact on his daily life. Dade's portrayal of a man in his late thirties, living with ADHD, is vivid, insightful, heart-tugging, and complex.

A few things I loved about this book (just a few because, oh my gosh, there are so many): the text interstitials between Alex and Marcus (his best friend and hero of Spoiler Alert), the group texts among the Gods of the Gates cast members, the road trip up the California coast (Alex's reaction to an innkeeper's "we only have one bed available" is pure gold), the tenderness, the sass, the playfulness, the consent, Alex's mom, the middle of the night walks, that cover (kudos to Avon for an accurately depicted heroine), and the final chapter of the book which has some of my all-time favorite scenes and lines, especially Lauren's. In this case, love is most definitely the best revenge.

I fell hard for Dade's debut, Spoiler Alert. I loved this follow-up novel even more. I laughed. I cried. I swooned. Then I laughed some more and, yes, shed more tears too. This book could not be more aptly titled because, I'm here to tell you, I felt all. the. feels.