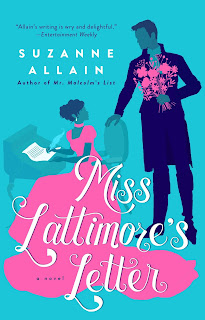 Sophronia Lattimore had her romantic dreams destroyed years ago and is resigned to her role as chaperone for her cousin. Still, she cannot sit idly by when she becomes aware that a gentleman is about to propose to the wrong woman. She sends him an anonymous letter that is soon the talk of the town, particularly when her advice proves to be correct. Her identity is discovered and Sophie, formerly a wallflower, becomes sought after for her “expert” matchmaking skills.

One person who seeks her out is the eligible and attractive Sir Edmund Winslow.  As Sophie assists Sir Edmund in his pursuit of a wife, she wishes she could recommend herself as his bride. However, she vows to remain uninvolved while aiding him in his search (especially since the gentleman surely does not return her affections).

But when her long-lost love and Sir Edmund both seem to be interested in courting her, Sophie can’t figure out if she’s headed for another broken heart­­ or for the altar. How can she be expected to help other people sort out their romantic lives when her own is such a disaster?

So as last week might have hinted (I have not stopped talking about my engagement, even with complete strangers, since it happened), I’ve been a little busy (see: talking)--and I am so sorry I was not able to read this book sooner so I could rave about it sooner. OH. MY. STARS. YOU GUYS.

Perfection. This book is sheer perfection. An adorable, hysterical comedy of manners with three different couples to root for and enough twists and turns to make me go, “Ha! I saw that coming!” What did I see coming, you ask? Well, as Miss Lattimore soon finds, no good deed goes unpunished. She wrote an anonymous letter in a bid for True Love, which then the appropriate couple finds, but soon she is revealed as the letter writer and she’s pursued for additional matchmaking advice...or even, confrontation from another character whose subsequent marriage may not be as well suited as she thought--and occurred because of the fated letter. Each heroine of these couples is flawed but loveable, which I think can be a challenging task (since I think I am more judgmental about my heroine characters than my heroes), and they each receive the perfect happy ending. So well done.

The “villain” of the piece--which probably is shared between a couple different characters at different points--were wonderful, one of which was particularly redeemable and I loved how that played out. The other one, a potential suitor who was a “blast from the past” so to speak, made me completely nervous--and I was entirely empathetic to Sophie as she’s trying to weigh her choices, whether to risk marrying him or not and the potentials of how everything would play out. The struggle of weighing the costs of a HEA with someone you loved previously--and the person you are now--while also weighing it against the very real issues for a person of her time period (i.e. “You’re a spinster and you got a proposal? You better take it, you drain-on-financial-resources, and be grateful!”)

The writing style was so “readable”--I immediately fell into the story and felt I was watching a BBC Masterpiece drama playing out on the tv in my brain. Very on-brand Georgette Heyer-esque novel in my opinion. One of my favorite scenes is early on when the characters are in Bath (which I feel is utilized not nearly enough anymore for Regency set stories), and one of the heroines is talking (read: being talked at) with a potential suitor, who is a bit of a dunderhead.

“They had reached the pump long before Sophie, where Lord Courtney had gallantly retrieved a glass for Cecilia but refused to drink any himself.

‘Don’t tell my aunt, but I loathe the stuff. Tastes like it’s been warming in a puddle by the side of the road.’

Since he said this just as Cecilia had taken her first sip, she suddenly found it very difficult to swallow and wished he’d kept his observations to himself….Cecilia recognized that Lord Courtney was the preeminent matrimonial prize of her generation and that it behooved her to make the most of this opportunity.

But he was not making it easy for her.

‘I wonder if it’s the pigs that cause the funny smell,’ he mused aloud.

‘You must have heard; some diseased nobleman’s swine nosed out the springs. In the last century. May have been King George’s pigs. Daresay inhaling too much of the odor is what led to his mental, uh, incapacitation.’...

Cecilia was not, by any stretch of the imagination, an intellectual, but she recognized that Lord Courtney’s statement was erroneous...And when Lord Courtney pointed to the statue of Beau Nash that hovered in a niche above them and said: “That’s King George there. Has a look of the prince regent about, doesn’t he?” it was all Cecilia could do not to spit her water in his face.

So when Mr. Hartwell turned up at that very moment, he once again had the appearance of a savior in her eyes.”

It’s dry...a little droll, and it encourages me to read every other page aloud to whoever is near me when I’m reading because I want to share how funny I find it.

So I’m sorry it’s taken me a bit longer to share this book with you, but I hope you will at least put it on your reading list--if you haven’t read it already. And if you’ve already got her on your auto-buy list, I see why...I can’t wait to read the next book. Top Dish for me.