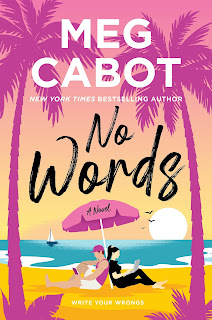 Don’t Judge a Book by Its Author...

Welcome to Little Bridge, one of the smallest, most beautiful islands in the Florida Keys.

Then Jo’s given an offer she can’t refuse: an all-expense paid trip to speak and sign at the island’s first ever book festival.

Even though arrogant Will is the last person Jo wants to see, she could really use the festival’s more-than-generous speaking fee. She’s suffering from a crippling case of writer’s block on the next installment of her bestselling children’s series, and her father needs financial help as well.

Then Jo hears that Will is off-island on the set of the film of his next book. Hallelujah!

But when she arrives on Little Bridge, Jo is in for a shock: Will is not only at the book festival, but seems genuinely sorry for his past actions—and more than willing not only to make amends, but prove to Jo that he’s a changed man.

Things seem to be looking up—until disaster strikes, causing Jo to wonder: Do any of us ever really know anyone?

Cabot returns to the Florida Keys for the third book in her Little Bridge Island romantic comedy series and it's my favorite so far.

One of Cabot's strengths is her ability to create a setting that is so realistic and appealing that it has me wanting to pack my bags and hop a plane. She then populates that setting with a variety of quirky, endearing, frequently complex, and occasionally villainous characters who, by the end of the book, feel more like friends than fictional characters. Okay, maybe not the villainous ones but the others, definitely.

I really enjoyed the evolving relationship between Jo and Will. Cabot took the story in different directions that I originally anticipated, allowing both characters significant growth in the process. I was surprised to discover how much my opinion of each of them evolved as they did themselves.

I also loved how the author brought Jo's Kitty Katz, Kitten Sitter book series to life in this book. I wish it was a real children's book series. I have two five-year-olds in the family who would adore it!

It's obvious Cabot has attended her share of book conferences/festivals in the way she writes the details of Little Bridge's first book festival and the authors who are in attendance. I found myself laughing out loud many times and also missing those events, even the awkward and sometimes embarrassing moments that inevitably occur. Whether you've attended one or not, there is plenty in this one to both entertain and amuse.

While No Words is the third book of a series, and there are a few characters from the first two books who make appearances, it stands on its own and readers can jump in without missing a beat. If you enjoy upbeat rom-coms with well-developed characters, heart-tugging emotion, and plenty of humor, take a trip to Little Bridge Island with Meg Cabot's No Words.