Review - - Messing with the Billionaire 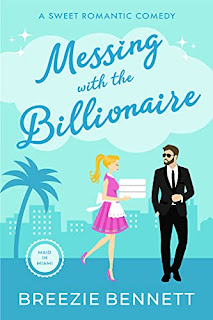 When a case of mistaken identity goes too far…can this billionaire win the trust of a woman who thinks she loves the gardener?

TJ: Buying a winter home in Miami Beach has its benefits. Not only did I escape the pressure of being a hedge fund manager in New York, but when my housekeeping team shows up and an adorable bubbly blonde is in charge, I find I like the tropical sun even more. Sure, I let her believe I’m the gardener because the mistake was amusing, and she was amazing. I obviously planned to tell her when she says yes to our first date, but…I didn’t. For once, a woman is really into me without the trappings of my wealth and status. But the joke’s on me when feelings get real and telling her the truth could wreck the best thing I’ve ever had.

Lilly: It's official. I've met the perfect guy. At least, he seems perfect. He might not be the best landscaper in Miami, but he looks great in a sweaty t-shirt out on the lawns of my client’s mansion. For once, I’ve found someone who appreciates hard work and, like me, didn’t get anything handed to him. The only problem is...I think he's hiding something. Something big. I want to believe that the sweet and humble gardener I'm falling in love with is as real as he seems...but some unanswered questions make me wonder if this is all just too good to be true. Who is he and can I trust him with my heart?

Breezie Bennett takes readers back to Miami for the first book in her new sweet and sassy, Maids in Miami romantic comedy series. When five best friends wrap up their business school post-grad degrees with no jobs on the horizon, they decide to return home to Miami, combine forces, and launch a high-end housekeeping service. These savvy, hard-working women are on their way, with a crew of top-notch workers and some solid contracts but what they really need is to land a few "rich and famous" clients for their business to soar. Will those clients also bring unexpected love?

I really enjoy Bennett's breezy (no pun intended) style of writing. It's fresh, fun, full of charm, has great depth of emotion, and a sweet, endearing sizzle. Lilly and TJ are likeable characters who have an immediate attraction that leaves them both - especially TJ - a bit flustered. It was easy to understand how - and why - mistaking TJ for the gardener occurred and why he let the assumption stand, especially when it was such a novelty to be admired and desired for himself and not his money. It gave the author time to explore their characters as well as allow them the opportunity to get to know one another without pre-conceived opinions. I enjoyed watching them slowly become friends, then more, as they opened themselves to one another. The only real issue I had with their relationship was how long it took for TJ to come clean about his real identity. Yes, he felt awful about it and yes, I did understand why it was so difficult for him to do it but it went on longer than I was comfortable with. Of course, I forgave him - as did Lilly - because, well, let's just say that soul-baring confessions and heartfelt grand gestures go a long way when securing a happy ending.

I love the support, love, laughter, and life-long friendships among these five women who, at this point, are really more chosen family than friends. I'm already invested in their happiness and eager to see more of all of them in future books in the series.