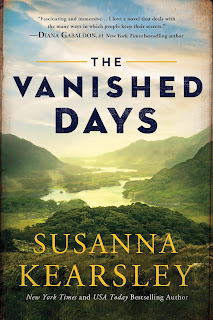 In the autumn of 1707, old enemies from the Highlands to the Borders are finding common ground as they join to protest the new Union with England. At the same time, the French are preparing to launch an invasion to bring the young exiled Jacobite king back to Scotland to reclaim his throne, and in Edinburgh the streets are filled with discontent and danger.

Queen Anne's commissioners, seeking to calm the situation, have begun paying out money sent up from London to settle the losses and wages owed to those Scots who took part in the disastrous Darien expedition eight years earlier—an ill-fated venture that left Scotland all but bankrupt.

When the young widow of a Darien sailor comes forward to collect her husband's wages, her claim is challenged. One of the men assigned to investigate has only days to decide if she's honest, or if his own feelings are blinding him to the truth.

For my money, Susanna Kearsley is one of the most gifted authors writing historical fiction today. With impeccable research, vivid descriptions, and complex, fully developed characters, she fully immerses me into whatever place and era she writes.

In The Vanished Days, that place is Edinburgh, Scotland and the time is 1707. The narrator of the story is Sergeant Adam Williamson, an American soldier of Scottish birth who is tasked with investigating the claim of the young widow, Lily. The story is told through flashbacks, from both his perspective as well as Lily's. It's intriguing, poignant, suspenseful, and powerful. Once I began reading, I could not put the book down, eagerly flipping pages right up until the stunning conclusion. It's a fictional tale of friendship, betrayal, intrigue, pride, mystery, revenge, and enduring love, seamlessly playing out across the historical landscape of actual events with real people interwoven throughout the fictional. I could probably fill three or four pages with everything I loved about this book but readers should have the personal experience of discovering all the facets of these characters as well as the twists and turns of the journey on their own.

While The Vanished Days is the third book of a series, it is actually a prequel to the first two books. Though it does weave in and out of the timeline of book one, The Winter Sea, it stands well on its own and readers shouldn't miss out on anything by reading The Vanished Days first. I do, however, highly recommend both The Winter Sea and book two, The Firebird. In fact, I recommend everything Susanna Kearsley has written. If you enjoy rich historical detail paired with spellbinding storytelling, she is an author you will not want to miss.

Have you read Susanna Kearsley yet?

Do you have a favorite novel of hers?

Who are some of your favorite historical fiction authors?