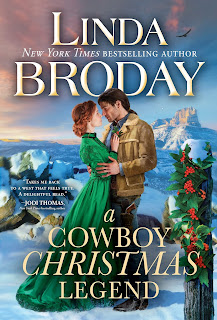 Devastated by the loss of his young wife―and the life he'd always thought would be his―Sam Legend II has done everything he can to make a fresh start. As a bladesmith, all he needs is a bed, a hot fire, and enough distance from his famous family to finally indulge in a little peace and quiet. So what if it's almost Christmas? This year, he's happy just keeping to himself.

But then fiery Cheyenne Ronan comes blasting into his home, and any notion of peace goes flying out the door.

Cheyenne's like no one Sam has ever met―and from the moment he first catches her eye, his quiet life is anything but. Now he's hunting wanted men with the Texas Rangers, decking every hall, and sharing passionate embraces with the woman who's set his world alight. For the first time in what feels like forever, Sam's facing Christmas feeling like his life is full of meaning again―and that with Cheyenne by his side, love can be the stuff of Legend.

When I first started reading romance novels--at a precociously young age--some of my favorites were cowboy set romances and I’m really glad for authors like Linda Broday who continue to bring stories with strong cowboys and feisty heroines. The cowboy motif in romances is just as tried-and-true as the Mr. Darcy version. If you have read Linda Broday before, you’ll see she has quite the backlog of books showing her passion for her setting as well as wonderful characters who light up the page. She doesn’t shy away from tougher aspects of the Western setting (which has gone through some transitions over the years as we’ve become more aware of how some aspects are represented and who is representing them--and in shining a light on those things that were hidden or ignored.) I think she does a great job in addressing some of these issues in a way that doesn’t sound preachy, but also being sensitive to those for whom these topics may trigger reactions or questions.

I used to bring library books to an elderly friend who wasn’t able to leave her house--and her request was always for either highlanders or cowboys; so I was always relieved when I saw a new Linda Broday book on the shelves. I knew there would be humor, adventure, and larger than life characters with a happily ever after. My friend passed away this year, so I read this book in memory of her--and I’m glad because Linda delivered. Sam Legend, who is the son of the famous ranger Sam Legend Sr, is a recluse who lives in a lean-to looking shed in the Texas hills where he creates knives. He is content with his life (not happy: he’s a widower who grieves for his wife, after all) but soon finds his peace interrupted by a little hellcat neighbor named Cheyenne. Soon it becomes apparent Sam will not be allowed to continue in his rut; and additionally, the townsfolk need his help as they are overrun by the same outlaws who were involved with his wife’s murder.

The pacing of this story kept me turning pages to see what would happen next; and at times I wondered how this was going to work out for everyone. But Linda was able to give a happily ever after despite all the travails that befell the characters. It was also adorable to read about how one might celebrate Christmas in Texas where trees aren’t readily available, but tumbleweeds are. Also, the Christmas play that is put on by the children is worth the read alone. Be forewarned that if you haven’t read the other books in the series, you will be very tempted to go back and read them if you start with this one. While this story stood perfectly on its own, I do long to go back and read the other heroes associated with this series.

If I did have any moments of disquiet about the story, it would be that I was at first taken aback by a heroine who would sneak up on a hero in the middle of the night and pull a knife on him, especially since she is like half his size; and I was also a bit concerned she was a white woman wearing native clothing, but Linda addressed my second concern almost immediately by having the hero call her out for wearing native clothing, presumably without permission, and the heroine explains the clothing was a gift from a good friend and also that she worked closely with the native populations, assisting them directly in saving children from the assimilation schools. Later, the more I got to read about Cheyenne’s character, the less I felt she was acting out of “time” for her setting; she was just a remarkable heroine who was traditional in many ways, but a fearless leader and pioneer in others. So yeah, she is the kind of heroine who could pull a knife on a hero and live to tell the tale.

All in all, a wonderful new story in Linda’s series about the Legend men; a heartfelt and traditional Christmas set love story; and one in which neither kids nor the dog die--which for me is paramount in any romance story. I don’t believe I’m giving something away by saying this--I assure you there will be plenty of characters to worry about. Happy reading!