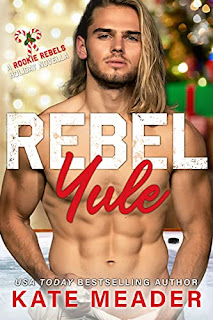 Casey Higgins, assistant to the Chicago Rebels owner, has a smile for everyone who comes into the front office—everyone but goalie Erik Jorgenson. And he has no idea why. For the last year, she’s refused to give him a kind word, and finally, he’s had enough. At the Rebels holiday party he’ll uncover the root of their mysterious conflict and show this woman that goalkeepers do their best work . . . on their knees.

Can a little Yuletide cheer get Erik into Casey’s good graces, warm bed, and frozen heart? Or will he fumble the puck and lose his chance? Join the Chicago Rebels this holiday season and find out if Erik is as good at saving Christmas as he is at saving goals!

I'm pretty sure I won’t be the only reader asking Santa for my very own Swedish hockey goalie after meeting Erik Jorgenson in Kate Meader’s Rebel Yule. He's a big, sexy, cuddly sweetheart with absolutely no clue what he's done to make his boss's admin dislike him so much. After a year of Casey treating him like something she'd scrape off her shoe, he's about to find out exactly why and, wow, I did not see that coming. But, boy howdy, did I ever enjoy what followed!

Rebel Yule is a quick read that sizzles with passion, simmers with sweetness, sparkles with snappy dialogue, and has all the heart-tugging emotion of a full-length Meader novel. Casey and Erik's story captured my heart and had me reaching for a fan more than once. I loved their chemistry and the depth of emotion that began to develop once misconceptions were addressed. Watching Casey grow emotionally and regain her self-confidence was wonderful. I loved how Erik was so supportive of her without taking over. There's a scene with the long-time ex-boyfriend who dumped her where I may have been cheering out loud (totally was). I also appreciated the way Meader handled Erik's "issue" (trying not to divulge spoilers here) that caused the initial friction with Casey. I've known someone with the same challenge but had never seen it in a fictional character before. I also enjoyed the banter - and obvious affection - between Erik and his family and the inclusion of their Swedish holiday traditions in the story. Add in Rebel and Rookie Rebel cameos, laugh-out-loud humor, unexpected twists, a closet scene I’ve reread more than a few times, plus a sigh-worthy happy ending, and you have a fun holiday story I'm sure I'll be rereading more than once.

I enthusiastically recommend adding Rebel Yule to your holiday book shopping list. Fans of the series are sure to enjoy watching the Rebel's endearing goalie finally find his heart's true love and win her heart with the well-meaning (read meddling) advice of pretty much everyone in the organization while for readers new to Kate Meader's hockey franchise, Rebel Yule is a great place to jump in.