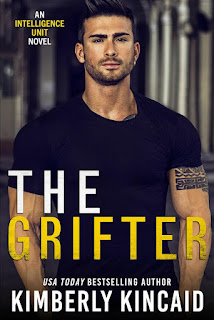 Only one person has ever rocked Detective Shawn Maxwell’s titanium composure. Francesca Rossi, his ex-partner. His ex-everything.
He hasn’t seen Frankie since she left him eight years ago and now he has to work with her on an undercover case that could break them both.But when Shawn’s world is turned upside down by the news that he has a three-year-old daughter, Frankie stuns him by being an unlikely ally.The more they’re together, the more the walls between them begin to crumble and the less he can resist the fierce, beautiful woman he fell for. But their past comes with wounds that run deep and the present holds danger neither of them see coming.Until suddenly, they aren’t just fighting for love. They’re fighting for their lives.
PJ's Thoughts:
The Grifter is the third book of Kincaid's Intelligence Unit romantic suspense series. Although it features continuing characters from the first two IU books along with cameos by characters from her other series set in Remington, NC, the book works well as a standalone.
Frankie and Shawn are complex, multi-layered, flawed characters with a complicated history between them. Kincaid did a wonderful job of bringing them to life along with their awkward, intense, and deeply emotional second-chance romance. These two really grabbed my heart with their unexpected tenderness, vulnerability, integrity, strength, and sizzle (I found myself reaching for a fan more than once). Then there's the bond of love that had been tested to its limits but, to their surprise, had never broken.
The romance in this book is well balanced with an intense, edge-of-the-seat suspense thread that had me gasping frequently. Kincaid has created a stone-cold, psychopathic villain who gave me chills. This dude is the stuff of nightmares. He leads Shawn and Frankie on a not-so-merry chase with life or death consequences that had me on edge from start to stunning finish.
As I mentioned earlier, characters from earlier books set in Remington weave in and out of this book with ease. Fans of the series will no doubt enjoy catching up with favorites while those readers new to Kincaid should be able to jump into The Grifter without missing a beat. If tightly woven romantic suspense with complex emotion, plenty of steam, and an unexpected character who brings out the tenderness in both our hero and heroine are your jam, give The Grifter a try. It has my enthusiastic recommendation.
CW: Drug Addition and Murder
Posted by pjpuppymom at 5:00 AM