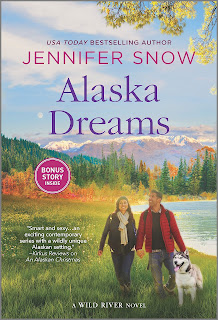 Is she making the right decision…for her career and her heart?Following a near-death experience, Selena Hudson is finally going after the career she wants. And since casting directors won’t see her as anything but a rom-com queen, Selena signs on to produce and star in her own movie—an edgy psychological thriller. But just as the cast and crew arrive on location in Wild River, Alaska, the leading man drops out of the production.Reporter Gus Orosco is not hiding out in Wild River—he’s waiting for the dust to settle after his on-camera “overreaction” triggered by watching his ex-fiancee get engaged to a superstar hockey player. Gus doesn’t want to be anywhere near the film crew shooting at his family’s campgrounds, but Selena makes him an offer he can’t refuse: she’ll snag Gus an interview with Sports Beat if he’ll be her leading man. All Gus has to do is learn his lines, hit his marks and somehow ignore the sparks flying between them…even though they’re hot enough to melt the Alaskan snow.
PJ's Thoughts:
Three years ago I stumbled upon An Alaskan Christmas, the first book in Jennifer Snow's Wild River series. That was all it took to hook me on Snow's writing, her small Alaskan town, and all of the interesting people who call it home.
Gus and Selena are both at a crossroads in their lives, let down by the people they loved, and struggling to forge new career paths. Well, Selena is forging ahead. Gus is still in the wallowing, I've lost everything stage. They should have a lot in common, and they do, but it will take a while for them to realize that. First, they'll have to move beyond their preconceived notions and instant animosity towards each other. And doesn't that turn out to be eye-opening fun!
I love these two together, their snappy banter, sizzling chemistry, and how their respect for one another slowly grows while they work together on Selena's film. I love Gus's innate goodness and the decisions he makes to protect and promote Selena. He doesn't always get it right but his heart is in the right place and I appreciate that he's willing to listen and learn.
I was in Selena's corner, urging her on as she sticks to her determination to call her own career shots after being "herded" into movie roles by others since she was a child. She's finished being taken advantage of and that applies to her personal life as well. But, like Gus, she also is in want of emotional growth. Snow does a good job of moving their relationship, as well as their individual evolution, forward slowly and realistically, with a satisfying amount of steam, and a few potholes to test them along the way. By the time they reached their story's conclusion, I was fully confident in their future happiness and their professional success.
As a fan of the series, it's always fun to catch up with former main, and secondary, characters from the earlier books. In this one, I especially enjoyed watching a certain almost-teen gradually coming into her own while helping on the movie set. She was an absolute delight. For readers new to Wild River, however, you should feel comfortable jumping in at any point in the series. Give this one a try. I enthusiastically recommend it.
Posted by pjpuppymom at 5:00 AM