Review - - Love and Fury: A Novel of Mary Wollstonecraft

Love and Fury: A Novel of Mary Wollstonecraft
by Samantha Silva
Publisher: Flatiron Books
Release Date: May 25, 2021
Reviewed by Hellie 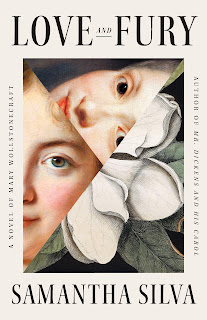 August, 1797. Midwife Parthenia Blenkinsop has delivered countless babies, but nothing prepares her for the experience that unfolds when she arrives at Mary Wollstonecraft’s door. Over the eleven harrowing days that follow, as Mrs. Blenkinsop fights for the survival of both mother and newborn, Wollstonecraft recounts the life she dared to live amidst the impossible constraints and prejudices of the late 18th century, rejecting the tyranny of men and marriage, risking everything to demand equality for herself and all women. She weaves her riveting tale to give her fragile daughter a reason to live, even as her own strength wanes. Wollstonecraft’s urgent story of loss and triumph forms the heartbreakingly brief intersection between the lives of a mother and daughter who will change the arc of history and thought.

In radiant prose, Samantha Silva delivers an ode to the dazzling life of Mary Wollstonecraft, one of the world's most influential thinkers and mother of the famous novelist Mary Shelley. But at its heart, Love and Fury is a story about the power of a woman reclaiming her own narrative to pass on to her daughter, and all daughters, for generations to come.

Due to my BA in English, I was already aware Mary Wollstonecraft died of childbed fever, so spoiler alert, I knew the ending would be Sad. Despite my educational studies, I was not exactly an expert on Miss Wollstonecraft, though I was aware she had written A Vindication on the Rights of Women, a book I own but have never read. Honestly, I knew more about her daughter, Mary Shelley, the daughter she gave birth to before she died, who’d written the first science fiction novel. But the cover was arresting and the premise interesting, and the writing from the first page, compelling. I could not put it down, even as the pages bore me along to Mary’s inevitable death and I grew sadder and sadder for this life that was about to be interrupted just when she had found true happiness.

But this book isn’t only about Mary. Parthenia Blenkinsop (what a great name!) is the midwife who has come to assist in the birthing–and her story is just as bittersweet and compelling as it unfolds. The book switches back and forth between chapters: first Parthenia, told in 3rd person; and then Mary, told in 1st person. Mary’s sections take us back to the beginning, her upbringing, how she became the fiery feminist alluded to in countless women’s studies classes. Parthenia’s sections are in the days of the birth until Mary dies, with interesting tidbits creating Mary’s current world (so different from the struggles she shares in the past). When I read Mary’s final entry, for me, I wished to still know more–to know how she and Godwin got together and had their HEA–but this wasn’t the arc of the book. It was a love story of a different kind, a love story for life, for her daughter struggling to live, and her encouragement to her little bird to keep struggling and living because even when life is sad, it is still beautiful.

The scene with Mary and her husband, where he asks her, “What would you have [the girls] believe?” and she says, “In love, that melts into friendship, and friendship that melts into love.” Gah. I wept. I read it to my fiancé and he wept. And there were a dozen poignant scenes like this, scenes that had tears well up in my eyes but also made my heart glad and hopeful. I finished this book in a crazy fast time, which is notable considering I don’t typically have a lot of time in the week for my reading and my weekend was spent helping my fiancé move furniture around the apartment for my eventual move-in. I stayed up late, I snuck off to the bedroom, I read at the table…it was the sort of literary love story of The Fault in Our Stars. You know you’re headed for heartbreak, but oh, the words, the beautiful words make it all worthwhile.