Review - - His Lessons on Love 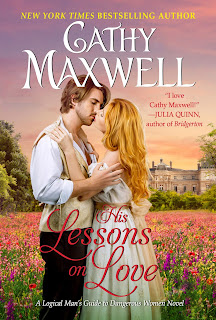 Lesson #1: A man, even titled and handsome, cannot be careless forever.

The Earl of Marsden—better known as Mars to all—has lived his life by his own rules…until he is presented with a very big problem in a very tiny package—a baby girl, his daughter cast off by his ex-mistress. Mars won’t let his child be cast adrift, except he doesn’t know the first thing about babies.

Panicking, he turns to a woman for help. Not just any woman, but Clarissa Taylor, village spinster, matron-in-training, and Mars’s greatest critic. Still, who better to tend a motherless child than a woman who was abandoned as a babe herself?

Lesson #2: Life always plays the upper hand—especially when it comes to love.

Clarissa desperately wishes to not to be beholden to anyone. She has spent a lifetime being pitied by the village. Her plan is simple—to use what the intolerable earl will pay her to become her own woman. It all sounds so straightforward until the threat of scandal sends her and the one man she can’t abide toward . . . marriage?

Mars and Clarissa are about to learn the greatest lesson of all—that sparks always fly when the iron is hot.

Witty dialog, laugh-out-loud humor, emotional depth, and the blending of some of my favorite tropes - marriage of convenience,  enemies to lovers, and opposites attract - make this third book in Maxwell's A Logical Man's Guide to Dangerous Women (don't you just love that title?) series my favorite.

This book can definitely be enjoyed as a standalone but for those of us who have read the first two books, the pairing of Clarissa and Mars comes as no surprise. These two have been walking a fine line between animosity and attraction for the entire series. Maxwell skillfully guides them from loathing to co-conspirators, to protectors of Mars' daughter, to friends, and finally, to love. I happily cheered them on the entire way as they both learned that appearances don't always tell the whole story, that people can change, and that love sometimes grows where least expected.

The book's title is certainly appropriate as Mars has much to learn, not only about love but about himself, his priorities, and the importance of focusing on the future rather than the past. But he isn't the only one who evolves. I appreciated the growth of both main characters as their stories were slowly unveiled to one another. There are some twists I saw coming, and others I didn't, that impacted each of them, contributing to how they viewed themselves as well as one another. I liked that the author didn't sugarcoat the difficult decisions that needed to be made and didn't give them any easy answers. Their HEA is one they have to work for which made it all the more sweet in the end. The secondary cast of characters add humor, conflict, and motivation to the overall story, some surprising me and others proving they are exactly as heartless as they appear. I may have cheered a few "just desserts" that are dished out.

If you enjoy well-crafted historical romance with complex characters, snappy banter, perfectly-placed humor, great chemistry, and life lessons that lead the way to a sigh-worthy happily ever after, pick up a copy of His Lessons on Love. I'm not sure if this book ends the series but wherever Maxwell decides to take readers next, I'll happily follow.