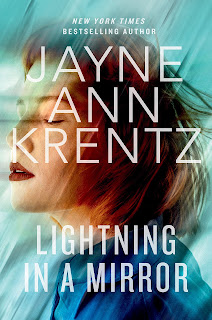 Olivia LeClair's experiment with speed dating is not going well. First there was the nasty encounter with the date from hell who tried to murder her and now the mysterious Harlan Rancourt—long believed dead—sits down at her table and tells her she's the only one who can help him locate the legendary Vortex lab. This is not what Olivia had in mind when she signed up for the Four Event Success Guaranteed package offered by the dating agency.  She doesn't have much choice, though, because her psychic investigation firm works for the mysterious Foundation and Victor Arganbright, the director, is adamant that she assist Harlan. There's just one problem—no one knows Harlan's real agenda. His father once ran the Foundation like a mob organization, and Harlan was destined to be his heir.  There's a real possibility Harlan has returned to claim his inheritance.  For now, however, it's a case of the enemy of my enemy is my friend because others are after the secrets of the long-lost lab. Unfortunately for Olivia, the one thing friend and foe have in common is that everyone is convinced she is the key. Her unique psychic talent is required to defuse the ticking time bomb that is Vortex. Neither trusts the other but Olivia and Harlan soon realize they must work together to survive and unlock the Bluestone Project's most dangerous secrets before more innocent people die.
PJ's Thoughts:
Immersive. Compelling. Addictive. Those are the first three words that came to mind as I sat down to record my thoughts about Lightning in a Mirror, the third and final book in Jayne Ann Krentz's Fogg Lake Trilogy.
As with the first two books in the trilogy, Lightning in a Mirror engaged my interest right from the start and then quickly engaged my emotions as well. Krentz's characters are complex, intriguing, and fully developed. They could be anyone you meet on the street except, of course, for their finely-tuned psychic talents. It's those talents that make them unique, highly sought after, and in some cases, very, very dangerous.
What makes this story so addictive is the same thing that also makes it so compelling: the author's ability to create a world where paranormal talent is plausible. When I read a vampire story, I'm fully aware that what I'm reading is fiction. But when I spend time with Krentz's characters, the prevailing thought in my mind is that their abilities, and the dangerous situations they could lead to, are within the realm of possibility. At least, possibilities that I'm willing to be open to. The world within our present world that she has created is so vividly and realistically portrayed that I become completely immersed in it, watching it unfold across my mind as if I was sitting in a darkened theater, seeing it play out on a huge screen. I believe in that world.
Once I began reading, there was no way I was going to be able to put this book down until I reached the end. I had to know what was going to happen on the next page...and the next...and the next. I cared about Olivia, her search for her mother's killer, and her stubborn resistance to her psychic destiny. I cared about Harlan and, believe me, after reading the entire trilogy, that came as a big surprise. And that wasn't the only surprise Krentz had in store for readers. I love it when an author keeps me on my toes with a variety of twists, turns, and unexpected detours. From start to finish, I was excited to discover what would happen next. This thrilling conclusion to the Fogg Lake Trilogy was all I could have asked for. I can't wait to find out what Krentz has in store for readers next.
Each of the books in this trilogy can stand on its own but there is an overarching story that runs through all three books. For maximum enjoyment, I recommend reading the three books in order: The Vanishing, All the Colors of Night, and Lightning in a Mirror.
~~~~~~~~~~~

Lightning in a Mirror

“If I disappeared tomorrow would you walk into hell to find me?” Olivia asked.

She did not look up from her phone. She wasn’t supposed to be on it. The rules of the speed dating event were quite specific about that. All phones, watches and assorted tech were to be powered down for the evening. But she had concluded the event was a waste of time, so she had palmed her phone from her handbag. She was now holding it under the edge of the cocktail table, where the event coordinator could not see it.

The knee-length burnt orange wool coat she was examining was stunning, but, sadly, the color was over-the-top for Seattle. Most of the outerwear on the city’s streets came in shades of gray, black, navy and forest green. If she were to stroll down Pine Street in a burnt orange coat, she might as well carry a sign that shouted tourist.

The man who had just sat down on the other side of the small, round table did not respond to the question. With a sigh, she looked up. It was obvious from his uncertain expression that he thought she was texting.

“I said, if I disappeared tomorrow would you walk into hell to find me?” she said.

“Excuse me?” He looked around and then leaned forward. He lowered his voice. “I think they said that we should turn off our phones.”

“Sorry.” She dropped the phone into her large handbag, wedging it between her turmeric-yellow wallet and the vintage camera. She took a closer look at her new date. The name tag stuck on his shirt identified him as Nathan.

“Hi, Nathan. I’m Olivia,” she said, going for bright and sparkly. “I’ll repeat my question. If I disappeared tomorrow would you walk into hell to find me?”

“Uh.” Nathan got a deer-in-the-headlights look.

She recognized the expression. Nathan was rapidly coming to the conclusion that she was weird. Within the next thirty seconds he would do what the previous dates had done—excuse himself and take off to find the restroom, where he would hide out until the bell rang.

It was not Nathan’s fault she had signed up for the Four Event Success Guaranteed package offered by the speed dating agency. So far most of the people she had met had been nice. A bit boring—but nice. The experiment had been a disaster for her, however.

She had purchased the package because it was 20 percent off. The first event had been a washout, but she had told herself to be optimistic. You couldn’t expect immediate success. But now she was midway through the second event and the prospects were looking even more dismal.

“I’m not sure exactly what you mean,” Nathan said.

He did a quick, furtive glance around the room. It didn’t take any psychic talent to know he was searching for the restrooms

She gave him another shiny smile. “The matchmaker said we are supposed to ask each other questions. That’s my question.”

“Oh.” Nathan cleared his throat. “Well, uh, I guess it would, you know, depend.”

At least Nathan was considering his answer, not running for the restroom. That was promising.

“What would it depend on?” she asked.

“How well I knew you. Whether or not you and I were, you know, close.”

“And if we were close?” she pressed. “Then would you walk into hell to find me?”

Panic sparked in Nathan’s eyes. He glanced at the table where the event coordinator sat. When he realized there was no salvation coming from that direction, he made a heroic effort to move forward.

“My turn,” he said, bubbling with artificial enthusiasm. “My question is, where do you like to go on vacation?”

“Hawaii. My turn. If I went missing would you walk into—”

“I guess I’d call your friends first,” Nathan said. He sat back in the booth, putting a little more distance between them. “See if they knew where you were. Then, uh, maybe call the cops. Hey, I like Hawaii, too. Do you snorkel?”

“No.” She leaned forward, closing the space he had just made. “How hard would you look for me?”

“Well, uh, I’m not an expert when it comes to search and rescue work. Don’t you need a dog for that?” Nathan shot to his feet. “Excuse me. Gotta hit the restroom. Be right back.”

And another one bites the dust. No, that wasn’t right, Olivia thought. I’m the one who just bit the dust. Again. She realized she didn’t care. The speed dating experiment was a failure. If she hadn’t bought the Four Event Success Guaranteed package she would leave right now. But she had made an investment, and the fine print was firm—no refunds.

From LIGHTNING IN A MIRROR published by arrangement with Berkley, an imprint of Penguin Random House LLC. Copyright © 2021 by Jayne Ann Krentz.

Have you read any Jayne Ann Krentz books?

Are you reading the Fogg Lake Trilogy?

Have you ever had any psychic experiences?

One person who posts a comment before 11:00 PM, January 23 will receive a hardback copy of Lightning in a Mirror.