Anyone who's been here for more than a minute knows that Anne Gracie is one of my favorite historical romance authors. Her humor, witty banter, emotional depth, and brilliantly-crafted, character-driven stories are always on my must-buy radar. Last summer, Gracie launched a new series with the release of The Scoundrel's Daughter, another keeper overflowing with passion, fully-dimensional characters, and feel-good romance (click to read PJ's 5-star review). This coming summer the second book in the series will be released and judging from the blurb below, it looks like I'll be once again reading late into the night. Take a look.
The Rake's Daughter
by Anne Gracie
The Brides of Bellaire Gardens - Book 2
Publisher: Berkley
Release Date: July 26, 2022
Available for pre-order at your favorite book-buying site, including:
Amazon
Barnes & Noble 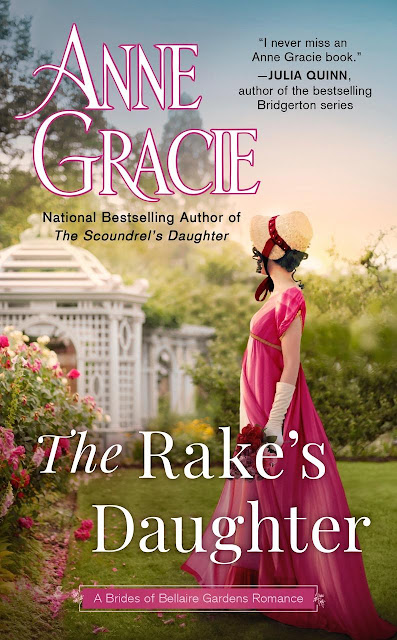 An earl is forced to play matchmaker for the daughters of a rake in a smart and witty new Regency romance from the national bestselling author of The Scoundrel’s Daughter.
Recently returned to England, Leo, the new Earl of Salcott, discovers he's been thrust into the role of guardian to an heiress, the daughter of a notorious rake. Even worse, his wealthy ward, Clarissa, has brought her half-sister, the beautiful but penniless Isobel, with her. Leo must find Clarissa a suitable husband, but her illegitimate half sister, Izzy, is another matter. Her lowly birth makes her quite unacceptable to London’s aristocratic circles.
However, the girls are devoted to each other and despite the risk of scandal if Izzy’s parentage is discovered, they refuse to be separated. To Leo’s frustration nothing will convince them otherwise. Even worse, sparks fly every time Leo and Izzy interact.
Called away to his country estate, Leo instructs the young ladies to stay quietly at home. But when he returns, he's infuriated to discover that Izzy and Clarissa have launched themselves into society — with tremendous success! There's no going back. Now Leo must enter society to protect Clarissa from fortune hunters, and try not to be driven mad by the sharp-witted, rebellious, and intoxicating Izzy.
Have you read Anne Gracie's books yet? Do you have a favorite (book or series)?
How much does a cover influence your decision to buy a book?
One randomly chosen person who posts a comment before 11:00 PM, February 2, 2022 will receive a print copy of The Scoundrel's Daughter.
*Open internationally
*Must be 18
www.annegracie.comFollow on Amazon Follow on FaceBook
Posted by pjpuppymom at 12:00 AM