Review - - The Redemption of Philip Thane 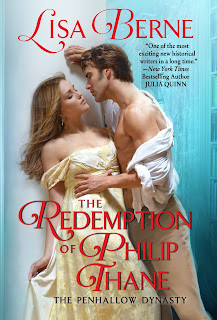 How many times can a rake get it wrong . . . before he becomes Mr. Right?

Philip Thane—rogue, rake and scoundrel extraordinaire—hadn’t wanted to visit some dumpy provincial town to give a speech, but he’d struck a devil’s bargain with old Henrietta Penhallow, the imperious family matriarch. Nor did he expect that once he got there, he’d somehow be living the same day over and over again. It’s strange! It’s terrible!

On the other hand, it is giving him time to cozy up to the delectable, brainy Margaret Allen, in town to research the book she’s writing. Philip is sure she’ll fall starry-eyed into his arms, just as women always do.

But to his amazement Miss Allen stands firm against his wiles, day after day. How can she resist his seductive charm? Why won’t she change her mind? What must he do to win her heart?

Maybe—just maybe—it isn’t Margaret who needs to change, but rather a certain rogue, in love for the first time in his life, who will.

PJ's Thoughts:
It took me a while to figure out what I wanted to say about this book. I was intrigued by the concept of one day in time repeatedly occurring over and over and over again, allowing for the gradual redemption of a character who most assuredly needs it. The inspiration for the novel came from Groundhog Day, a 1993 movie starring Bill Murray that used this concept with great success. Unfortunately, for me, what worked in a visual medium was less effective on the page.
I've read Lisa Berne before. She's a good writer with a voice I enjoy and her writing in this book is good. The characters are vividly depicted, as are the citizens of the rural village where our main characters are stuck reliving Plough Day festivities. The challenge I had was with the format and the very slow pace for two-thirds of the book. I'm sure there are readers who will enjoy the character study (of Philip) that this type of plot device lends itself to. I wanted faster progression of the story and found myself losing interest, skimming paragraphs, pages, and whole sections. It didn't help that I found Philip repugnant for the majority of the book, didn't care if he was redeemed, and wanted to warn Margaret to run as far from him as she could. But then I hit the 70% mark of the book and everything changed.
It took me two weeks to reach that 70% mark. I raced through the final 30% in a matter of hours. Here was the progression I had been waiting for, the redemption I doubted I would be able to buy into (I did), and the genuine feelings I needed to accept a relationship between Philip and Margaret (who I adored).
If this had not been a romance I think I may have been more patient with the slow pace of the book. As character studies go, it's well done; I just wanted more advancement of the romantic relationship, a faster pace, and I really wanted to spend less than 70% of the book actively disliking the hero.
Props to the author for trying something different with this book. If the premise is intriguing, and you don't mind a slower pace, give it a try or at least check out some other reviews. Just because parts of it didn't work for me doesn't mean you won't love it.
Posted by pjpuppymom at 5:00 AM