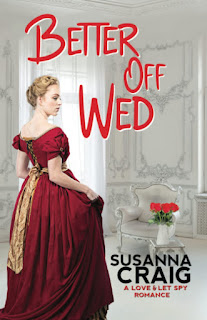 She’s an avenging angel…who tempts him like the devil… If Miss Laura Hopkins desired a husband, her beauty, brains, and fortune would make it easy to acquire one. Instead, Laura prefers to put her charms to another purpose entirely. Using the alias Lady Sterling, Laura helps young women who have been mistreated or compromised by their employers. Some might see it as theft and blackmail. For Laura, it is a small measure of justice. But while in pursuit of her latest target, Laura is unexpectedly aided by a gentleman who announces that he is Lord Sterling. As a spy for the Crown, Captain Jeremy Addison, Viscount Sterling, has been assigned all manner of dangerous missions, though none as complicated as investigating the beguiling Lady Sterling. Forced to pose as newlyweds at the home of a disreputable earl, Laura and Jeremy forge an unexpected alliance…and a passionate connection. But can such a dangerous masquerade possibly lead to a real, lasting love?
PJ's Thoughts:
I've been reading Susanna Craig since her debut. It wasn't long before her witty banter, impeccable research, complex storylines, and intriguing, fully-developed characters made her one of my auto-buy authors. All of those facets, and more, are on full display in her newest novel: Better Off Wed.
If you've been reading this series, and you were around in the 80's, you may have already noticed that each book is inspired by a popular 1980's television show. This one takes its inspiration from one of my favorites, Remington Steele, offering up original characters and a fresh storyline - set in a different era - but imbued with the wit, charm, and chemistry that made the TV series so enjoyably addictive.
Laura and Jeremy are wonderful together and I adored them both. How could I not love Laura's determination to protect those women and girls with no voice or agency, at the mercy of entitled men? And kind, honorable, brilliant, bookish, virginal Jeremy. ::Sigh:: I do love a hero who is a virgin - for reasons - and Jeremy is one of my favorites. These two together had my heart happy dancing for so many reasons. The chemistry, respect, understanding and support of one another that grew, along with love, over the course of their story had me firmly in their corner, cheering them on the whole way.
I especially enjoyed how Craig intertwined the evolution of their romantic relationship with the mystery element of the story. Both sides progressed forward apace, never falling too heavily to either side, keeping me eagerly turning pages to discover what would happen next.
One of the things I like about this series is that while there is a common thread - a matchmaking spymaster - each of the books in the series stands alone and they can be enjoyed in any order. If you haven't started reading the Love and Let Spy series yet, feel free to jump in with Better Off Wed. It has my enthusiastic recommendation.
~~~~~~~~~~~~~~

Since I write historical romance, I’m always interested in learning more about how (or whether) people of the past celebrated important days and events. In Regency England, the Christmas season lasted from St. Nicholas’s Day (December 6) through Twelfth Night (January 5 or 6, depending on the reckoning), a period marked by family gatherings, parties, gift giving, good food, and of course religious observances. 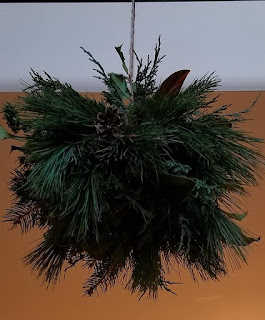 On Christmas Eve, evergreens were brought into the houses of rich and poor alike. A massive Yule Log, often large enough to last through the remainder of Christmastide, was lit. Kissing Boughs, made of holly, ivy, and mistletoe were hung—though more conservative households might omit the mistletoe. Check out the pictures of the Kissing Bough I made with local greenery (sadly, no mistletoe), crafted by poking the stems into a lemon (you can also use an apple or small orange).

For many in Regency England, Christmas Day included church services and a lavish dinner, topped off with plum pudding. On the day after Christmas, St. Stephen’s Day, charitable giving was the focus. Employers gave their servants boxes of food, money, and other items, which led to the designation “Boxing Day.”

But what of Twelfth Night, the end of the Twelve Days of Christmas? Some marked the occasion with a party of family and friends. Parlor games such as Blind Man’s Bluff, Charades (which involved solving rhyming riddles), and Snapdragon (in which participants snatched raisins from a bowl of flaming brandy, hopefully without getting burned) were perennial favorites throughout the Christmas season.

Wassailing is another Twelfth Night tradition, coming down from Anglo-Saxon times and evolving into our modern practice of caroling. Groups of revelers traveled from house to house, singing and spreading cheer and blessings. As you can hear in the lyrics to songs such as “Here We Come A-Wassailing,” their efforts were to be rewarded by the local landowners with food, drink (the traditional “wassail bowl” of punch or mulled wine), and even money.

Another version of wassailing involved blessing the fruit trees and is also still practiced in some places. Farmers and villagers walked from orchard to orchard in a noisy parade led by the Wassail King and Queen, singing and banging pots and pans to rouse the tree spirits and drive away evil in hopes of a prosperous harvest.

Finally, readers of historical romance have surely encountered one particularly romantic form of Twelfth Night revelry: a masquerade ball, a final night of celebration and freedom, with dancing, flirting, and a few more stolen kisses beneath the Kissing Bough.

But all good things must come to an end. Christmas decorations traditionally came down at Epiphany, and the greenery was burned to ensure good luck in the New Year. How will you be marking the end of the Christmas season? Personally, I’ll be curling up with some new books and a cup of cocoa (although going into the woods and yelling at trees does sound tempting…) I’m also thinking of leaving the twinkle lights up, to brighten the dark winter nights.

Tell me about your unique holiday traditions, and one lucky commenter will get their choice of gift: a signed print copy of One Thing Leads to a Lover (US shipping only) or an ebook copy and a $10 Amazon gift card (open internationally).