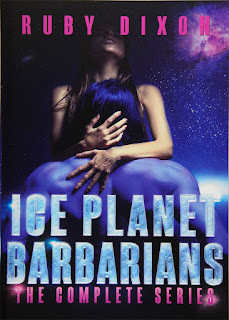 You’d think being abducted by aliens would be the worst thing that could happen to me. And you’d be wrong. Because now the aliens are having ship trouble, and they’ve left their cargo of human women—including me—on an ice planet.

We’re not equipped for life in this desolate winter wasteland. Since I’m the unofficial leader, I head out into the snow to look for help.

I find help all right. A big blue horned alien introduces himself in a rather . . . startling way. Vektal says that I'm his mate, his chosen female—and that the reason his chest is purring is because of my presence. He’ll help me and my people survive, but this poses a new problem.

If Vektal helps us survive, I’m not sure he’s going to want to let me go.

Some elements in this book worked very well for me. Others, not so much, but that’s where subjective tastes come in. What didn’t work for me might be the very thing you like best. With all that said, let’s start by looking at the things I liked.

The lead characters, Georgie and Vektal, are strong, smart, empathetic, and responsible. I liked them both a lot. Georgie becoming the de facto leader of the women from Earth was believable, and she’s an easy character to root for. When the alien kidnappers dump their cargo on the ice planet, Georgie ventures out to see whether there’s any help available.

She finds rather more than she bargained for when she encounters Vektal. He’s the chief of a tribe that’s dying out because of its low female birth rate. We learn a bit about their history in a way that fits the story well, adds to it, and doesn’t slow things down. His intense devotion to Georgie fits with the way his tribe is established. I tend to prefer that fated mates not be so all-in about it immediately, but that’s a matter of personal taste.

The story moves at a good pace with solid action scenes and alternating points of view. I’m not a huge fan of first person present tense, but it worked fine for me here. The stories after the end of the novel are a nice bonus.

The supporting characters are not developed extensively, but giving them a lot of page space would take away from the main story. I was content to have Liz and Kira spotlighted among the Earth women and to have a general sense of each of the others. The same goes for Vektal’s tribe, with the healer, Maylak having the most attention.

The language differences and resulting communication problems are handled logically. The scene where the women scavenge clothing to protect Georgie in the icy wastes is well done though understandably unpleasant in places due to the state of the clothing and the reason it’s available. The tribal men’s longing for mates and their resulting eagerness to meet Georgie’s comrades makes perfect sense in context. The cultural differences about nudity and sex are well drawn and believable.

But those bring me to the biggest things that didn’t work for me, again matters of personal taste.

This is a little bit of a spoiler, so I’ll try not to be too specific.

I found those aspects of the story really off-putting. I also realize other readers may be fine with them.

The ice planet is well drawn, and the references to Hoth from Star Wars are cute. While I generally like the worldbuilding, I have some issues. There are trees but not much else in the way of plants. This is not a climate hospitable to agriculture. So are all the animals carnivores? If people are drinking tea, what’s it made from?

I found it odd that people deciding whether to leave their homes and lives behind forever don’t have more regret and grief over that, especially ones who refer to friends and family. It wouldn’t take more than a few sentences to cover that. Despite a different hard choice necessary for survival, I think actual people would be a little more freaked out about that result. Again, a few sentences would’ve dealt with that.

Rating the book, I considered my qualms about character and choices, downplaying the four really-off-putting-to-me factors, and balanced those against the things I liked. If the four I mentioned early on are deal breakers for you, this book won’t appeal to you. If they’re not, I think you could enjoy it immensely despite my character issues.

Overall, I recommend the book to readers who don’t consider those four factors deal breakers.