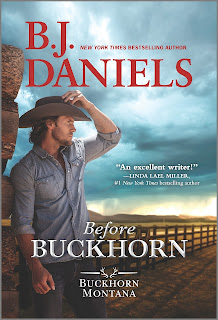 Former cop Jasper Cole has come home to Buckhorn to ranch—and to find some peace. But there’s one part of his past he doesn’t object to facing again. Darby Fulton acts like she’s forgotten the searing one-night stand they shared in college, but to Jasper, she’s as fascinating and tempting as ever. And when she’s drawn into an unsettling local mystery, he follows, despite his misgivings.Bad things have been happening to Buckhorn residents, and Darby’s sure it has something to do with a new store called Gossip. As a newspaper publisher, she can’t ignore the story, any more than she can ignore her deep attraction to Jasper. And as their investigation reignites that spark, it also pulls them both into a twisted scheme of revenge, where secrets are a deadly weapon…
PJ's Thoughts:
Note to self: don't start a B.J. Daniels book at night. I know better. At least, I should know better. Obviously I don't, considering I finally closed my Kindle at 3:00 AM because I kept falling asleep and dropping it on my pillow. Thankfully, not on my face. Did I mention I had to get up at 7:00 AM for an early appointment? Did I care? No, I did not. I was that immersed in this story. I needed to know what was going to happen next. If only I could have kept my eyes open.
Daniels set the stage for this story from the first page with the creepiness of gathering crows foreshadowing danger, death...possibly murder? She gave me a community of intriguing characters with complex backgrounds. Then she added in the mysterious Leviathan Nash, newly-arrived owner of Gossip, an invitation-only business that has Buckhorn's citizens on edge...and worse. What exactly was happening in those 30-minute sessions with the weird little man that was causing devastation, rage, and worse among the fine folks of Buckhorn? And why does it seem like Jasper Cole and Darby Fulton are smack-dab in the middle of Nash's quest? Who is this man? What does he want? And how far will he go to get it?
Before Buckhorn is twisty, compelling, mysterious, creepy, and impossible to put down. It's the kind of story that pulled me in, gave me a main couple to pull for, secondary characters who tugged at my heartstrings, danger that had my heart in my throat, and sent me on an emotional roller coaster ride, all the while keeping me on the edge of my seat as I tried (and failed) to figure out exactly what would happen next. I loved it!
This is the fourth book in Daniels' Buckhorn, Montana series. While the main storyline of Before Buckhorn stands well on its own, there were pieces of information about key secondary characters, past events, and future stories that I felt I would have understood better had I already read the first three books in the series. I will be doing that soon.
Posted by pjpuppymom at 4:00 AM