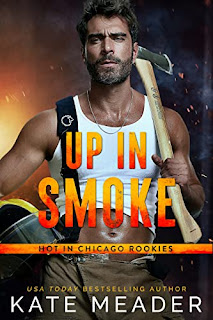 Lives are on the line at Engine 6 … and so are hearts.Running an engine crew in the Chicago Fire Department is my dream job, and between that, my awesome kid, and my nosy sister, I lead a pretty great life. Bruised and burned by my marriage, I don’t have time for dating or drama, but I always have time for pie. And when I share a slice of cherry with a sweet redhead, followed by the hottest, dirtiest, most pulse-pounding kiss of my life, I start to rethink the possibilities.Until that woman walks into my firehouse and upends my well-ordered world.Abby Sullivan is now a rookie firefighter on my crew and a threat to my self-control more dangerous than a five-alarm blaze. My job is to watch her six when all I want is to watch her fall into my bed. Lust has no place in the firehouse, and a distraction like Abby with her electric blue eyes, waves of flame-red hair, and freckles I want to map with my tongue, is one I can ill afford.Because one wrong move … and it could all go up in smoke.Up in Smoke is the first in the brand new Hot in Chicago Rookies series about firefighters navigating the trials of new jobs and sizzling romances as they find their place in the world and the love of a lifetime.
PJ's Thoughts:
Kate Meader's Hot in Chicago series is one of my favorite contemporary romance series. When I found out she was planning a new, connected, Hot in Chicago Rookies series, I was beyond excited. A whole new batch of firefighters with potential updates on my favorite characters from the original series? Yes, please!
Up in Smoke brought me everything I've come to expect from a Kate Meader novel. Her characters are intriguing, relatable, multi-layered, and fully formed, with complex journeys filled with steam, emotional depth, and hard-won happy endings. It didn't take me long to be emotionally engaged and full invested in both Abby and Roman. I mean, how could I not love Roman? Here's a badass, gorgeous, growly firefighter with a marshmallow core, a single dad who puts his daughter first, a man who respects and supports the woman he loves, a man who isn't afraid to be vulnerable...and he cooks! And speaking of vulnerable. My heart ached for Abby. She's a tiger on the job (I loved her determination) but carries a huge amount of emotional baggage. Her emotional journey was full of twists and turns that left me exhausted but oh, so satisfied at the end. I loved the banter between them, the steamy chemistry, and the sweetness.
I also enjoyed the secondary characters, especially Roman's snarky twin sister, his endearing daughter, and Abby's two Academy buddies. One of those buddies is up next in a M/M crossover novel between Meader's Hot in Chicago Rookies (firefighter) and Rookie Rebels (hockey) series. I can't wait!
If you've read the original Hot in Chicago series you'll most likely love catching up with many of your Dempsey favorites in this new series as much as I did but if you're new to Meader's hot firefighters, go ahead and jump right in with Up in Smoke. But don't be surprised if you find yourself wanting to know more about Luke, Alex, Gage, and the entire Dempsey clan while also getting to know the newest additions to Engine 6.
Posted by pjpuppymom at 5:00 AM