If you missed my review of Island Queen by Vanessa Riley when it posted back in July, 2021, here's another opportunity to check out an incredible book that was one of my top reads of last year. If you're intrigued by the story, hop on over to your favorite online book-buying site and download Island Queen in e-book format for only $2.99 (limited time sale). I cannot recommend this book highly enough.
Visit Vanessa Riley's website for direct buy links and more information about the accolades earned by Island Queen, including being optioned for TV/Film!
If you're a print reader, be sure to check out the giveaway at the end of this post!

A Tale That Had to Be Told

ISLAND QUEEN is a historical fiction novel based on the compelling life of Dorothy "Doll" Kirwan Thomas who rose from slavery to become the wealthiest woman landowner in the early 1800's Caribbean. A mistress to royalty, the future King William IV of England, Dorothy advocated for women's rights and successfully appealed the unfair taxation of free persons of color on the colony of Demerara. 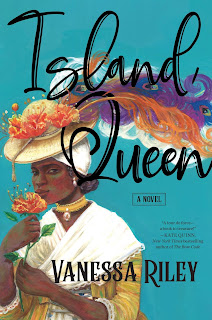 Born into slavery on the tiny Caribbean island of Montserrat, Doll bought her freedom—and that of her sister and her mother—from her Irish planter father and built a legacy of wealth and power as an entrepreneur, merchant, hotelier, and planter that extended from the marketplaces and sugar plantations of Dominica and Barbados to a glittering luxury hotel in Demerara on the South American continent.

Vanessa Riley’s novel brings Doll to vivid life as she rises above the harsh realities of slavery and colonialism by working the system and leveraging the competing attentions of the men in her life: a restless shipping merchant, Joseph Thomas; a wealthy planter hiding a secret, John Coseveldt Cells; and a roguish naval captain who will later become King William IV of England.

From the bustling port cities of the West Indies to the forbidding drawing rooms of London’s elite, Island Queen is a sweeping epic of an adventurer and a survivor who answered to no one but herself as she rose to power and autonomy against all odds, defying rigid eighteenth-century morality and the oppression of women as well as people of color. It is an unforgettable portrait of a true larger-than-life woman who made her mark on history.

Two years ago this month, I was at a romance conference enjoying a late-night slice of cheesecake with a group of authors. One of those authors, Vanessa Riley, began telling us about a woman she had discovered through research - a rich, powerful, strong, complex woman of color; a former slave who had endured the horrors of that life before buying her own freedom - and whose eventual influence stretched from the islands of the Caribbean to the royal halls of London. Riley wanted to tell the story of this woman none of us had ever heard of. Wanted readers of all colors to know who Dorothy (Doll) Kirwan Thomas was, what she endured, what she accomplished, why her life was meaningful, why this woman mattered. I could hear the passion in Riley's voice, her determination to tell this story the right way. I couldn't wait to read it.

I just turned the final page of Island Queen. I'm not sure I have words to do it justice. But Vanessa Riley did. What she has created is nothing short of a masterpiece. This impeccably-researched recreation of an extraordinary life immersed me into Dolly's world, from the terror and bloodshed of a young slave child's first rebellion, to the ninth decade of a life lived to the fullest. Riley held nothing back, giving readers a front-row seat to the uncensored lows and highs of this fascinating and complicated woman's life. By the end of the book, I didn't only know about Doll. I knew her. Riley brought her to life, with all her flaws, strengths, fears, fierceness, and vulnerability. She may not have secured page space in our history books but I would wager that no one who reads Island Queen will ever forget Dorothy Kirwan Thomas. I know I won't.

This is a long book - almost 600 pages - but the narrative never lost me. I was fully engaged from beginning to end. Not a single sentence or character was extraneous. Each carefully considered word was necessary to do this story justice.

Be sure to also read the Author's Notes at the end of the book as they are filled with fascinating facts about Riley's research as well as more information about Dolly's children, grandchildren, and other real-life characters in the book.

Island Queen is one of the best books I've read in 2021. Vanessa Riley did not only fulfill the promise of that story idea she told our group about back in 2019. She far surpassed it. This book has my highest recommendation.

CW: Readers should be aware that some parts of the book involving rape, incest, death, and slavery may be difficult to read but, in my opinion, are necessary to understand the full scope of Dolly's life.

Do you enjoy historical fiction?

Had you heard of Dorothy Kirwan Thomas prior to Island Queen being published?

What's the last book you read that blew your expectations out of the water?

One randomly chosen person who posts a comment before 11:00 PM, February 11, 2022 will receive a signed, hardback copy of Island Queen.