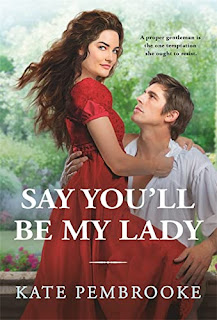 Lady Serena Wynter doesn’t mind flirting with a bit of scandal—she’s determined to ignore society’s strictures and live life on her own fiercely independent terms. These days, she chooses to pour her passions into charitable causes with the vibrant group of ladies in her Wednesday Afternoon Social Club. But there is one man who stirs Serena’s deepest emotions, one who’s irresistibly handsome, infuriatingly circumspect, and too honorable for his own good...Charles Townshend, former boxer and consummate gentleman, worries Serena’s reckless nature will earn her the ton’s scorn…or put her in serious danger. Though Charles isn’t immune to the attraction between them, a shocking family secret prevents him from ever acting on his desires. But it seems Lady Serena doesn’t intend to let his penchant for propriety stand in the way of a mutually satisfying dalliance.
PJ's Thoughts:
The ladies of the Wednesday Afternoon Social Club are back and this time it's Lady Serena who is in the spotlight. A strong-willed woman with a finely-developed social conscience, Serena has no interest in tying herself to a man through the bonds of matrimony. That doesn't mean she wouldn't be interested in a close relationship of another sort. Too bad the only man who inspires thoughts of that kind is too honorable to be seduced. Oh yes, and he's also her dear friend.
Friends to lovers is one of my favorite romance tropes, one that Pembrooke used to good effect in this novel. I enjoyed the solid foundation of friendship between Serena and Charles, the ease and open communications they shared. I liked that they were their true, authentic selves with one another. Yes, each had a secret tucked deep into their hearts but, eventually, those were revealed and it was a testament to their respect for one another that those reveals did not precipitate angst or drama. Instead, they only deepened the affection and understanding between them. I was intrigued by the cross-class facet of their relationship. While Charles had strong connections to certain members of society, he was neither titled nor wealthy, a deficit (in his eyes) that he felt strongly eliminated him from Lady Serena's marital consideration. Good thing the lady who held his heart was confident, self-assured, and boldly certain of what she wanted.
I adored Jem, the young boy who unexpectedly entered their lives and opened both Serena and Charles to new possibilities. He was an absolute delight whose scenes with Serena, Charles, and Serena's father touched my heart and left me happily smiling. I wish we had seen more of him in the latter part of the book. He was a bright ray of sunshine that I missed.
There's a richly depicted secondary cast surrounding Charles and Serena who add texture, humor, conflict, and support to the main characters without detracting from the central romantic journey. It was fun to catch up with characters from book one, make the acquaintance of some new ones, and set the stage for the next book in the series. I'm already excited for a new hero who is a reluctant peer, notorious rakehell, and, apparently, enjoys reading time tucked into quiet corners of a local bookstore. Or is the lovely young lady who frequents that store the draw? I've already marked my calendar for Phoebe and Simon's story in Sweet Dreams Are Made of Dukes, due to be published in the fall of 2022.
While I enjoyed the first book in this series (read my review) and characters from that story (including Serena and Charles) are also present in this second book, readers should absolutely be able to enjoy Say You'll Be My Lady on its own. If you have not yet read book one, however, be sure to check out the giveaway below.
~~~~~~~~
Do you enjoy the friends-to-lovers trope?
Have you read Kate Pembrooke's debut, Not the Kind of Earl You Marry, yet?
Are cross-class romances your cup of tea? What do you like/not like about them?
One person who posts a comment before 11:00 PM, February 22 will receive a print copy of Not the Kind of Earl You Marry.
*U.S. only
*Must be 18
*Void where prohibited
Posted by pjpuppymom at 6:00 AM