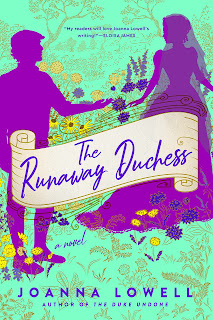 Pretty and pampered, Lavinia Yardley always dreamed of becoming a duchess. But family disgrace forces her into marriage with the most vile duke in England, and she finds herself desperate for a way out. When a rustic stranger mistakes her for globe-trotting botanist Muriel Pendrake at a train station, Lavinia has a split second to decide whether to submit to her fate or steal someone else's.Neal Traymayne spent his youth traveling the world as Varnham Nursery's most daring plant hunter. Now he runs the nursery and is ready to settle down with a like-minded wife who'll fit right in with his large, happy, down-to-earth family. His correspondence with Muriel Pendrake proved they're the perfect match. Odd that the woman in the flesh seems more like a society belle than a scientist.As they tramp the Cornish moors together, Lavinia and Neal discover a wild and rare desire. But this blossoming love is rooted in lies, and when the real Muriel Pendrake shows up, they can't hide from who they are. The truth may wither their hopes of happiness, or it may bloom into the sweetest love of all.
Santa says:

The Runaway Duchess by Joanna Lowell is the second book in this series and another five star read for me. Lowell takes us across Cornwall and enchants at every turn. Can a plant hunter and a duchess on the run - who he mistakes for a famous botanist - arrive at love? Lowell crafts a story that does just that.

I have to say that the role of a plant hunter and the whole infrastructure behind the gardens of the wealthy of Victorian England is a revelation to me; as is the book’s hero Neal Tramayne. Neal is a world traveling plant hunter for Varnham Nurseries. Heroes do not, in fact, have to be dressed by Weston and Neal is proof of this. He is a well rounded character and, if you will forgive the phrase, very down to earth.

We were introduced to Lavinia Yardley in Joanna Lowell’s previous book The Duke Undone.  She was Anthony, the Duke of Weston’s fiancé. That is until it is revealed her father nearly swindled him out of a fortune. She and her mother are destitute and shunned by a fickle ton now that her father is in jail. Their situation is so dire that her mother sees the only recourse is for Lavinia to marry. The only man who will have her is an abusive, old, lecherous reprobate, the Duke of Cranbrook.

Lavina reluctantly agrees to marry him. She is repulsed at every turn and can’t bring herself to consummate the marriage. Fortune seems to shine on Lavinia for once in her life when they somehow get separated on the train ride to his estate. She meets Neal on that platform where he first mistakes her for Mrs. Pendrake. He whisks her off to forage the wilds of Cornwall. However, this Mrs. Pendrake comes off as more debutante than intrepid world traveler.

They grow close as Lavina spends time with Neal. Love enters their journey. He takes her to meet his wildly eccentric, genius of a family. He brings to Lavinia Yardley, aka Duchess Cranbrooke, a clearer vision of herself. He actually sees her even as he mistakes her for Mrs. Murial Pendrake.

No man in her life has ever actually seen her. They’ve manipulated her as her father had. They used her as the man she gave herself to did. They married her just to use and abuse her. But Neal’s love causes the scales to fall from her eyes and see the potential she has in herself.

This is not to say that their relationship is an easy one. He realizes that Lavinia is indeed not his Muriel Pendrake. Lavinia returns to London and continues to remain hidden as the duke is still at his estate. Neal and Lavinia meet up again at his nursery when the real Mrs. Pendrake appears and Lavinia feels lost again.

It’s crazy but through it she discovers her truer self and that she is, of all things, a writer. It is through the intervention of their friends, and fate finally giving Lavinia a good turn, that they reach their happily ever after. Such delicious angst and her richness of characters are a treat. I highly recommend you pick up a copy of The Runaway Duchess.

Are you a plant person? What types of plants do you grow?

Have you read Joanna Lowell yet?

One person who posts a comment before 11:00 PM, February 6 will receive a print copy of The Duke Undone.