Review - - The Lady Tempts an Heir 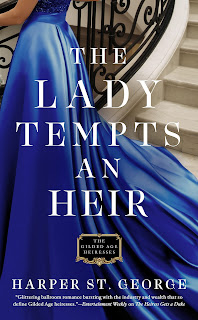 Tall, dark, and brooding—to say that American Maxwell Crenshaw stood out in the glittering ballrooms of London is an understatement. He vowed never to set foot in England again, but when a summons from his father along with an ultimatum to secure his legacy has him crossing the Atlantic for the last time, reuniting him with the delectable Lady Helena March, he can’t deny the temptation she presents. Or the ideas she inspires… Lady Helena March is flirting with scandal. Instead of spending her time at teas and balls in search of another husband, as is expected of a young widow, Helena pours her energy into The London Home for Young Women. But Society gives no quarter to unmarried radicals who associate with illegitimate children and fallen women, and Helena’s funding is almost run out. So when the sinfully seductive Crenshaw heir suggests a fake engagement to save them both—him from an unwanted marriage and her from scorn and financial ruin—Helena finds herself too fascinated to refuse the sexy American. As their arrangement of convenience melts oh so deliciously into nights of passion, their deception starts to become real. But if Max knew the true reason Helena can never remarry, he wouldn’t look at her with such heat in his eyes. Or might the Crenshaw heir be willing to do whatever it takes to win the one woman he’s never been able to forget…
PJ's Thoughts:
I've been eagerly counting the days until the release of this book since first seeing Helena and Max on the page together in book two, The Devil and the Heiress. Happy to say their journey did not disappoint.
Fake relationships are one of my favorite tropes. I liked that Max and Helena entered into this one with equal commitment and benefit. It was obvious that the close proximity generated by their faux relationship was going to lead to deeper feelings but the path they traveled to get there was brimming with peaks, valleys, and a few surprises. I enjoyed the fact that they both evolved because of their time spent with the other. I liked their mutual respect, their shared social conscience and desire to help those less fortunate, their ambition, and determination to forge their own paths regardless of pressure from family. And I loved their chemistry! These two set off enough sparks to start a forest fire. St. George slowly ramped up the tension between them, allowing the passion to build organically. So good.
I had no idea how the author would solve the dilemma of Helena and Max coming from two different worlds, with family, friends, work, and passion projects in each. In the end, it was done in a way that was satisfying and believable. One key element keeping the pair apart was a very personal secret Helena was keeping, something many real-life couples deal with. St. George could have solved this dilemma in an oft-used "miracle" manner but chose to take a more realistic approach. Kudos to her for doing so. For me, it solidified the depth and strength of Max's love and commitment to Helena.
It was fun to see August and Violet (Max's sisters) continue on their journeys with their husbands as they weaved in and out of Max and Helena's story. I was also delighted to learn that their American friend, Camille will have a chance to claim a happy ending in St. George's next book, The Duchess Takes a Husband. After basically being sold by her parents to a horrible Duke with one foot in the grave in exchange for a title, she's more than earned her shot at love and romance.
If you haven't yet read the first two books in the Gilded Age Heiresses series, click on the titles to read my reviews of The Heiress Gets a Duke (August's story) and The Devil and the Heiress (Violet's story). All three books in the series have my enthusiastic recommendation.
Posted by pjpuppymom at 4:00 AM