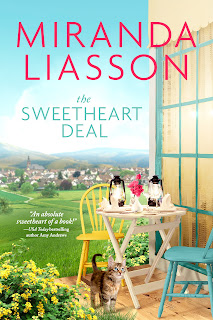 Pastry chef Tessa Montgomery knows what everyone in the teeny town of Blossom Glen says about her. Spinster. Ice Queen. Such a shame. It's enough to make a woman bake her troubles away, dreaming of Parisian delicacies while she makes bread at her mother's struggling boulangerie. That is until Tessa's mortal enemy - deliciously handsome (if arrogant) chef Leo Castorini, who owns the restaurant next door - proposes a business plan...to get married.
Leo knows that the Castorinis and the Montgomerys hate each other, but a marriage might just force these stubborn families to work together and blend their businesses for success. The deal is simple: Tessa and Leo marry, live together for six months, and then go their separate ways. Easy peasy.
It's a sweetheart deal where everyone gets what they want - until feelings between the faux newlyweds start seriously complicating the mix. Have they discovered the perfect recipe for success...or is disaster on the way.
PJ's Thoughts:
There are so many delicious threads to pull in this story and Liasson expertly handles them all. We have rivals forced to work together to save both of their family businesses. Stubborn families set on doing things their own way along with nurturing a generations-old feud. A hero who made his mark in New York and is now back to help guide his family restaurant into the future - if his father will just listen to his ideas. A heroine who dreams of leaving their small town to pursue her own dreams, a secret she's been keeping since high school, and inconvenient feelings she's beginning to have for her convenient husband who - oops - is having feelings too.
I laughed, I cheered, I may have shed a few happy tears too. These characters were so relatable. I understood Leo and Tessa both wanting to make their own mark, the frustrations they faced with their parents, Tessa's feelings of being "stuck," even though the sacrifices she willingly (and in some cases, secretly) made were for the people she loved. I really enjoyed the growing relationship between her and Leo. Liasson realistically portrayed the ups and downs that come with that type of situation. I had no idea how she was going to pull everything together in a way that would make everyone happy but she accomplished it in the best possible way that left me thoroughly satisfied. I appreciated the complex dynamics that often occur when an adult child attempts to steer a family business in a new direction. Also, I would be remiss if I didn't mention that both Leo's and Tessa's families are in the food industry, owning an Italian restaurant and boulangerie, respectively. My advice is to have both napkins and snacks at hand while reading this book. If you have freshly baked bread or pasta, all the better.
I am now completely invested in the town of Blossom Glen and her citizens. I'm excited to discover what Liasson has planned for Tessa's sisters as well as their friends. I don't know how many books she has planned for this series but I'll be here for all of them.
~~~~~~~~

EXCERPT from THE SWEETHEART DEAL

At first glance, the Castorinis’ place was dark, but then she noticed a very faint glow. As her eyes adjusted to the darkness, she could see Leo hunched over a laptop, a small lamp burning at his table.

Call it the moon, call it desperation, call it whatever you wanted, but something made her rap on the glass.

Leo jerked his head up. His brows lifted in surprise, and he gave her the hold-on-a-sec sign.

Her stomach tumbled. What have I just done?

“Hey,” he said as he pulled the door open. His usually perfect hair was a little disheveled, like he’d been raking his hands through it. Dark, dangerous stubble shadowed his face. His discerning gaze skirted quickly over her from head to toe, like he was trying to find some visible reason she’d be here.

This had been an awful idea.

On closer examination, she noticed he had circles under his eyes, and his button-up shirt was halfway untucked. Could it be that he was feeling the same stress that she was?

“Did you need something?” he asked.

He smiled a little, then stepped aside to let her pass. “Come on in. It’s safe. I’m the only one here.” His voice was low and gravelly, in a way that reminded her of a sexy model in a cologne commercial as he awakened in a breezy-curtained villa, throwing back the silk sheets and walking naked to his balcony overlooking the Adriatic Sea.

Okay, stress was making her imagination go wild. And also, safe felt like a real misnomer.

She followed Leo back to the table where he’d been working and ran her hand along her carelessly swooped-up bun, thinking she must look a mess after working all day and into the night. But why should she care? She wasn’t here to impress.

As she sat down across from him, he asked, “Do you have good news for me?” He gave her a hopeful look that made her want to lie. That made her think that maybe they weren’t so different. They both loved their families. They both wanted their hard work to bring success.

But this was business, so she straightened her spine. “No deal with the bread. My mom won’t have it. She’d rather be bankrupt than have us bake for your restaurant. I’m sorry.”

He sighed heavily, and for the first time ever, he didn’t seem to be shrugging things off with a smile.

“Any luck on your end?” she asked. “I mean, about selling your ideas to your dad?”

He sat back, tossing his pen over the many scattered papers. “No,” he said simply. Just one word, jam-packed with frustration.

She should just go home. What was the point of continuing a conversation? Yet she recognized a look in his eyes—the same desperate desire to do something to stop these ships from sinking. And…and she was now past want. She needed that wine.

“I—” She felt her voice giving out. “I actually was wondering if you had any wine. I mean, I’d pay you for it.”

He looked her over in what she was coming to learn was a thoroughly assessing way of his, a mixture of curiosity and something more intense that made her feel stripped down to the bone. “What are you doing downtown at this hour?”

She hitched a thumb toward the bakery. “I was just sneak baking.” She mentally head slapped herself. Why had she confessed that? It was private. To most people, anyway.

“Oh. Sometimes I go in after hours and bake whatever I want. It’s…a way of unwinding, I guess. Being creative. Forgetting about everything else.”

“I might have to try it. Because all I do after hours is pore over the numbers. And then I can’t sleep.”

“You probably shouldn’t be downtown alone at night.”

In Blossom Glen? Tessa waved a hand dismissively. “Like you?” He smiled a little at that. “I’ve been doing it for years. It’s my therapy.”

His lips cracked a slight smile. “Wine sounds like a great idea.” That warmth in his eyes was back, and it was directed at her. Only briefly, though, and then he got up and went to the back room.

She was hungry—yearning, even—for what was really at stake here: her dreams, her life, a way out—and her imagination was in overdrive lately. But while she was way too smart to make the same mistake that she made when she was eighteen, to think that Leo had actually liked her, she knew what it meant when a man looked at her a certain way.

Heat and desire from her nemesis. Now that was a real recipe for disaster. 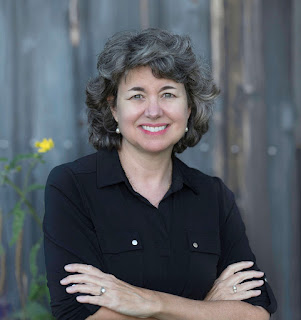 For more information about Miranda Liasson and her books, visit her website or follow her on social media at Facebook, Twitter, and Instagram.
Do you enjoy small-town romances?
Have you read Miranda Liasson?
Today is Valentine's Day. How are you celebrating?
Because it's Valentine's Day, Miranda very graciously offered this giveaway package to one randomly chosen reader who posts a comment before 11:00 PM (EST), February 15. Good luck! 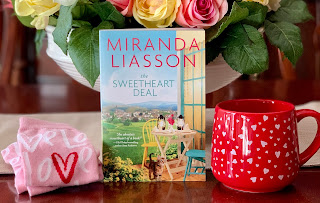