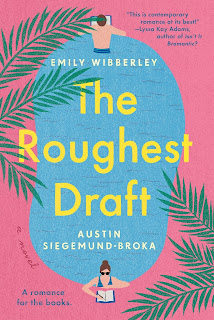 Three years ago, Katrina Freeling and Nathan Van Huysen were the brightest literary stars on the horizon, their cowritten book topping bestseller lists. But on the heels of their greatest success, they ended their partnership on bad terms, for reasons neither would divulge to the public. They haven't spoken since, and never planned to, except they have one final book due on contract.Facing crossroads in their personal and professional lives, they're forced to reunite. The last thing they ever thought they'd do again is hole up in the tiny Florida town where they wrote their previous book, trying to finish a new manuscript quickly and painlessly. Working through the reasons they've hated each other for the past three years isn't easy, especially not while writing a romantic novel.While passion and prose push them closer together in the Florida heat, Katrina and Nathan will learn that relationships, like writing, sometimes take a few rough drafts before they get it right.
Santa says:

The Roughest Draft by authors Emily Wibberley and Austin Siegemund-Broka was an amazing introduction to these authors. They were writing in a new genre having authored YA novels in the past. I have to say that it is a triumphant 5 star foray into the contemporary adult romance world.

This book had me at the edge of my seat! Is it a murder mystery? No, not in the least! It’s a romance! They had both a professional and personal relationship that exploded spectacularly.

The main characters, Katrina and Nathan, are - or were - successful, rising star co-authors. Everything was going along great until it didn't. And we are not told why right away. The reasons unfold almost organically as their stories are told from each character’s point of view.

The book opens a couple of years after one of the authors, Katrina, had walked away from the partnership and from writing while Nathan continues to pursue a writing career.  However, they still have one more book under contract and their publisher and agents are holding them to fulfilling that obligation. Nathan and Katrina have no choice but to hunker down and write that final book in the close proximity of a rented house in Florida just like they did when they collaborated on the other two books.

Nathan and Katrina have their work cut out for them. They are two lost, wounded people. The tension is almost a physical entity. They face many emotional obstacles as they find their way back as writers and friends and, ultimately - finally - lovers.

The authors of The Roughest Draft are a husband and wife team. I imagine there are many challenges in writing together. This is the first book I have read by them and, easily, one of my favorites for this year. I will be following their books both in this genre and in YA.