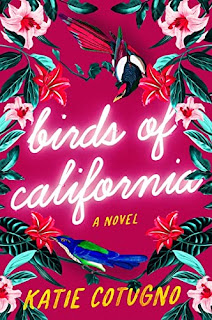 Former child actor Fiona St. James dropped out of the spotlight after a spectacularly public crash and burn. The tabloids called her crazy and self-destructive and said she’d lost her mind. Now in her late twenties, Fiona believes her humiliating past is firmly behind her. She’s finally regained a modicum of privacy, and she won’t let anything—or anyone—mess it up.

Unlike Fiona, Sam Fox, who played her older brother on the popular television show Birds of California, loves the perks that come with being a successful Hollywood actor: fame, women, parties, money. When his current show gets cancelled and his agent starts to avoid his calls, the desperate actor enthusiastically signs on for a Birds of California revival. But to make it happen, he needs Fiona St. James.

Against her better judgment, Fiona agrees to have lunch with Sam. What happens next takes them both by surprise. Sam is enthralled by Fiona’s take-no-prisoners attitude, and Fiona discovers a lovable goofball behind Sam’s close-up-ready face. Long drives to the beach, late nights at dive bars . . . theirs is the kind of kitschy romance Hollywood sells. But just like in the rom-coms Fiona despises, there’s a twist that threatens her new love. Sam doesn’t know the full story behind her breakdown. What happens when she reveals the truth?

I wasn’t sure what I was getting into when I picked this book–mainly I thought the title sounded interesting and I like rom coms and California. When I later saw the phrases “smartly sexy” and “whip-smart romantic comedy,” I felt a pang of trepidation. Those are phrases sometimes used by those who don’t actually like romance novels–especially romantic comedies–because they’re “too frothy” and “too precious.” They’re the people who loved 500 Days of Summer* as a romantic comedy over say, 13 Going on 30. If it ends too neatly, if we like everyone at the end of this story–well, was it really a story worth reading? Yes, yes it is, damnit.

Fortunately both Fiona and Sam are likable people; and the secondary characters in their lives are hilarious and even more likable than they are. They don’t start off as particularly likable. In their own ways, by themselves, they’re great, but put them together and it felt as if it brought out the worst in both of them. Eventually they seemed to bring out the best in each other–but In The Beginning, it was a slog. The author was sufficient in motivating her characters so their actions/reactions felt authentic and realistic to the storyline. (I.e. they were jerks, but you understood why they were–and I was fine to keep reading about them. So character driven storytelling–yes, this story was compelling.)

Underneath the romance plotline was a shark-like plot-point that kept swimming up to the reader, though it was not “seen” until almost the end of the book. I knew I was in danger; I knew I wouldn’t like when this plot point was finally revealed because I knew it was ugly and horrific. And the villain who instigated this behavior keeps cropping up in the book like some creepy Gene Wilder-Willy Wonka. Keep your golden ticket, jerk, we don’t need it. I also understand that this topic is kept under such shame that it is hard to read about and only by writing about it, do we shed light and bring it out to the open, release the shame from those who do not deserve it. I just don’t necessarily like my rom-coms to be the place to set these types of stories. To me, it feels a bit deceptive, like a bait and switch. It’s why I look for context clues in blurbs like “whip-smart romantic comedy” to go, “Hmmm, is someone going to die? It’s not a dog is it?” I’m not sure why this wasn’t published under “women’s fiction”, like what Kristan Higgins did with her more recent books. Before? Total rom-com. Recently? Definitely trickier situations and not everything is a neat and happy ending.

The ending is…well, more of an Okay, for Now rather than a Happy for Now ending. (It’s definitely not a HEA variety.) It’s the kind of “realistic” ending that some readers would prefer their romances to have. For me, that only makes me go, “Wait, where’s the rest of the book? This book isn’t done until they’re happy forever–or at least 20 years and they get an amicable divorce.” I’m a traditionalist, as Terri Osburn would call me, then roll her eyes. I’m one step away from yelling at people to get off my lawn; I may not have been the perfect match for this particular book. Overall, the book is good and the characters are real–I would just have termed the story as a women’s fiction over a rom-com.

*To those of you who loved 500 Days of Summer, I promise I’m not yucking on your yum. I’m truly glad they make a wide variety of romance in books and movies so everyone can enjoy what they love. I only dislike when it feels like some romances are pitted against others as “being better and smarter.” We should all love our romance and celebrate it.