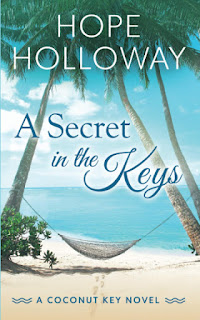 One of my favorite reading discoveries last year was the Coconut Key series by Hope Holloway. This women's fiction / contemporary romance blend immersed me in a tropical world of humor, heart, conflict, and emotion that checked all my happy reader boxes. Holloway created a family (biological and chosen) of intriguing, multi-layered characters whose lives played out across seven books, pulling me deeper into their lives with each story told. I was sad to say good-bye but excited to discover what this very talented author had planned next. Turns out, what came next was only a few hours up the Gulf coast and, after two books, looks to be just as addictive as Coconut Key.
Sanibel Dreams
by Hope Holloway
Shellseeker Beach - Book 1
Release Date: March 11, 2022 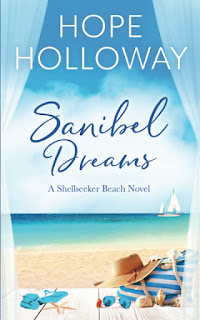 When 53-year-old Eliza Whitney loses both her beloved husband and her high-powered job in the same month, she’s uncertain what the next chapter of her life will look like. Then her estranged father’s widow contacts her and asks her to come to Sanibel Island to help settle his affairs. Eliza sees the trip to a place called Shellseeker Beach as a distraction from her loss, and maybe a way to get some closure on the difficult relationship she'd had with her father.For seventy years, Theodora Blessing’s sole purpose on this earth has been to heal the hurting, and to run Shellseeker Cottages, a cozy beachfront resort that has been in her family for decades. But Teddy no longer owns the gorgeous property, and Eliza is her only hope to get it back. Will Eliza help Teddy and save the family business…or claim it as her own and sell it to developers?Together, the two women begin to unravel the mystery of Eliza’s father, the late, great “Dutch” Vanderveen, an enigmatic pilot who led multiple, secretive lives. With the help of Teddy’s healing heart, Eliza discovers a family she never knew she had, a purpose she never knew she needed, and a life she never dreamed was possible.

Appropriately named, Holloway's new Shellseeker Beach series is set on Sanibel Island, just off the southwest coast of Florida. As with the previous series, Holloway sets the stage with the sights, scents, and sounds of this particular location, immersing the reader in all of the details that make Sanibel a popular tourist destination. Having lived in Southwest Florida for many years, losing myself in the atmospheric details of Holloway's writing felt like going home.
Sanibel Treasures
by Hope Holloway
Shellseeker Beach - Book 2
Release Date: April 15, 2022 New arrivals to Shellseeker Beach prompt Eliza to extend her trip…and fall deeper under the spell of Sanibel Island. The group of close family and friends are determined to settle the ownership of the beachfront property once and for all. But it seems there are forces outside of their control determined to shatter all their dreams.As she takes time to reconsider her career, Eliza’s daughter finds herself in the middle of conflicting feelings for two very different men. Balancing what she wants with what she needs, this shrewd businesswoman discovers that sometimes the best decisions are made with the heart, and not the head.These resilient women face new challenges, build lasting friendships, and find a second chance at love, all while they fight to save Shellseeker Beach’s greatest treasure of all…the family that they’ve finally found.
The new series launched last month with Sanibel Dreams and continues this month with book two, Sanibel Treasures. Setting the stage for the series, the first book focused primarily on Eliza Whitney and Theodora "Teddy" Blessing, two women who will figure prominently in the series. But their stories will be intertwined with others as the series progresses. I love the theme of chosen family that prevails in these books. Already, we have met several characters whose stories I hope will be told in more depth as time goes on. In Sanibel Dreams, we learned of a mystery involving a deceased character whose actions have brought several characters, including Teddy and Eliza, together. Continuing in Sanibel Treasures, facts continue to come to light with ensuing consequences - and surprises - that impact more than a few people.
As with Coconut Key, it only took one book in the Shellseeker Beach series to fully hook me. I am already invested in these characters, curious to discover where Holloway will lead them next, and eager to meet those who have not yet appeared. I love the wide array of characters who inhabit Holloway's fictional world, bringing different life views to the overall story. And I appreciate seeing the series anchored by women in their fifth and seventh decade, though characters of varying ages and with different backgrounds will be featured in the seven books within the series.
Holloway writes with an approachable, smooth style, welcoming the reader into her world with comfort and ease. She isn't hesitant to tackle difficult subjects but, overall, her books are filled with hope, heart, humor, and positivity. I enthusiastically recommend them but fair warning: once you start, you may very well binge the entire series. If you're headed for the beach, the pool, or just the backyard, these are great books to take with you.
Have you read Hope Holloway yet?
What constitutes a good "beach read" for you?
Southwest Florida's beaches are some of my favorite beaches in the world. What beach is your favorite or which one would you most like to visit?
Two randomly chosen people who post a comment before 11:00 PM, April 23 will receive a copy of their choice of A Secret in the Keys (Coconut Key - Book 1) or Sanibel Dreams (Shellseeker Beach - Book 1).
*U.S. only
*Must be 18
*Void where prohibited
~~~~~~~~~~
Both the Coconut Key series and the Shellseeker Beach series are available on Kindle Unlimited and for purchase in e-book and print.
The Coconut Key series celebrates older heroines, second chance romance, entangled families, and lifelong friendships.