Review - - Rules for Engaging the Earl 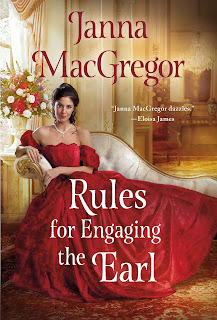 Constance Lysander needs a husband. Or, so society says. She’s about to give birth to her late husband’s child—a man who left her with zero money, and two other wives she didn’t know about. Thankfully, she has her Aunt by her side, and the two other wives have become close friends. But still—with a baby on the way, her shipping business to run, and an enemy skulking about, she has no time to find the perfect match.Enter Jonathan, Earl of Sykeston. Returned war hero and Constance’s childhood best friend, his reentry into society has been harsh. Maligned for an injury he received in the line of duty, Jonathan prefers to stay out of sight. It’s the only way to keep his heart from completely crumbling. But when a missive from Constance requests his presence—to their marriage ceremony—Jonathan is on board. His feelings for Constance run deep, and he’ll do anything to make her happy, though it means risking his already bruised heart.With Constance, Jonathan, and the new baby all together, it’s clear the wounds—both on the surface and in their relationship—run deep. But when the nights come, their wounds begin to heal, and both come to realize that their marriage of convenience is so much more than just a bargain.
PJ's Thoughts:
I adored Constance and Jonathan. I would even go so far as to say they are my favorite MacGregor couple. They, and their journey to love, captured my imagination, held my attention, and touched my heart. This one is going to my keeper shelf where I have no doubt I'll be revisiting them more than once.
MacGregor's depiction of Jonathan made my heart ache. Here was a man who desperately needed the love and support Constance was offering yet couldn't bring himself to accept it...or believe that he was worthy of it. Yet there were glimpses of the man he had once been and ached to be again, even if he wasn't yet ready to admit it. I enjoyed how MacGregor used not only his evolving relationship with Constance but his relationships with his dog, the new baby, and his matchmaking butler to underscore the gradual opening of his heart.
There was so much to admire about Constance. I loved her strength, her determination, and her huge heart. I appreciated her independence and business savvy, the respect she commanded among her workers. I loved that she held Jonathan to account for his actions, not settling for less than she deserved, less than they both deserved.
The chemistry between this couple sizzled but there was also plenty of tenderness well, with lively banter and more than a few humorous moments to light the way. And MacGregor tempered those lighter moments with an emotional depth that infused their relationship with layers, complexity, and the hard-won happy ending that convinced me these two would endure any obstacles life threw their way.
This is book two in MacGregor's The Widow Rules trilogy. While it could be enjoyed on its own, I think readers will enjoy it much more if they begin with book one, A Duke in Time.
Posted by pjpuppymom at 5:00 AM