Review - - The Marquess Makes His Move 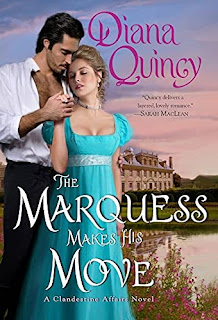 The new footman doesn’t seem to know his place…

London’s most renowned mapmaker is a woman...but nobody knows it. If anyone discovers that Rose Fleming is the power and talent behind the family business, the scandal could ruin them. Rose’s secret is tested by the arrival of a handsome new footman who shows far too much interest in his new mistress. Rose battles an intense attraction to the enigmatic servant, but maintaining a proper distance isn’t easy when you and temptation live under the same roof.

She makes him forget he has a score to settle…

Few have met the reclusive half-Arab Marquess of Brandon, who is rumored to live with a harem of beauties among his mother’s people near Jerusalem. Brandon couldn’t care less what society thinks of him, or that his fellow peers are disdainful of his common blood, but he won’t stand for being robbed. That’s why he's disguised himself as a footman in the home of a respected mapmaker who cheated Brandon out of his land. But the nobleman's plans for retribution are complicated by his growing attraction for the secretive lady of the house.

When Brandon uncovers the shocking truth about Rose’s role in his stolen birthright, can a love born of deception really conquer all?

I didn't discover Diana Quincy until 2020 when Her Night with the Duke, book one in her Clandestine Affairs series was released (click to read my review). Since then, I have eagerly awaited each of her books, stories that have further reinforced her standing as one of my go-to historical romance authors.

I love stories where the hero has a singular goal from which nothing will deter him. Until the heroine appears on the scene. Suddenly, that clear-cut goal is a little...well...maybe not quite so clear cut. Such is the case with Alex and Rose and I lapped it up like a kitten with a saucer of milk. These two were so good together. And the swoony, sensual heat they generated. Yes, please!

My heart ached for Rose's situation. The villain and what he did to her! Oh, the curses I rained over his head! It was wonderful to watch her evolve and take control of her life. The kindness, friendship, and support Alex offered had me sighing with so many good feels. He wasn't perfect - because, reasons - but I was still in his corner, cheering him on. I had no idea how these two would ever find a way to be together that was honorable and right. But the author had a few twists up her sleeve that, wow, I did not see coming.

As with the first two books in the series, this one is rich with cultural representation, honoring the author's own heritage. I enjoyed how the characters' Arab culture was woven seamlessly and naturally throughout the book, featuring the joy of language, food, and traditions that were an intrinsic part of their culture. But I also appreciated the fact that the author did not hide the biases these same characters faced within English society, or the internal conflicts they caused, even to those (like Alex) with a title.

The supporting cast of this book is filled with characters who add humor, heart, and realism to the story. I loved the relationship between Alex and his sister (heroine of book one) which overflows with realistic, sometimes humorous, always "tell it like it is" siblings vibes. The scenes featuring his three-year-old, scene-stealing niece are adorable. And then there's the staff at Rose's home who often had me laughing out loud. Quincy is quite skilled at creating fully-developed characters who come to life on the page.

If you have not yet discovered Diana Quincy, I enthusiastically recommend The Marquess Makes His Move. The couples from books one and two do appear in this book but I don't think you lose anything if you should decide to read the books out of order.