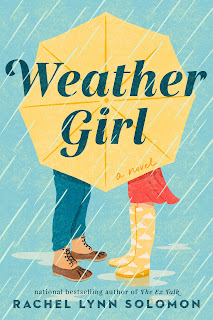 Ari Abrams has always been fascinated by the weather, and she loves almost everything about her job as a TV meteorologist. Her boss, legendary Seattle weatherwoman Torrance Hale, is too distracted by her tempestuous relationship with her ex-husband, the station’s news director, to give Ari the mentorship she wants. Ari, who runs on sunshine and optimism, is at her wits’ end. The only person who seems to understand how she feels is sweet but reserved sports reporter Russell Barringer.


In the aftermath of a disastrous holiday party, Ari and Russell decide to team up to solve their bosses’ relationship issues. Between secret gifts and double dates, they start nudging their bosses back together. But their well-meaning meddling backfires when the real chemistry builds between Ari and Russell.

Working closely with Russell means allowing him to get to know parts of herself that Ari keeps hidden from everyone. Will he be able to embrace her dark clouds as well as her clear skies?
Nancy says:

We meet Ari Abrams when she goes to see her station’s first billboard featuring her. Naturally, a bid has “decorated” it. I say naturally because things do go that way for Ari at various times in the book. She’s with her brother when she sees the billboard. Her ability to take the billboard disaster with humor, the warmth of the siblings’ relationship and her obvious affection for her brother’s husband and their children make Ari likeable off the bat. It’s easy to root for her.

As we go through the book, we learn she suffers from depression, which she handles by being as positive as possible. This way of dealing with it keeps the character from seeming mopey despite the consequences it has had at various times in her life.

The hero, Russell Barringer, comes across as a genuinely nice guy. He and Ari bond when commiserating after a disastrous holiday party that highlights both the desire and the antipathy between their bosses. Russell, too, has challenges. He’s on the heavy side, which nearly cost him his job as a sports reporter because the boss didn’t like the optics of that. He also has a young daughter he co-parents with his ex. But his relatively even emotional keel nicely counterbalances Ari’s depression. My only complaint about Russell is that while he says the station manager thought he was fat, Ari only ever describes him as a big guy. This left me wondering whether he’s carrying a little extra weight or a lot. Or something in between. It doesn’t matter in terms of his character, but not knowing distracted me.

As Ari and Russell scheme to throw their bosses together, they are also growing closer. Their families move in and out of the story, and their dynamics were pleasant. Russell, his ex, and her new husband all seem to like each other, Russell’s daughter is a gem, and Ari’s brother and his family are lovely and supportive. The only downer is Ari’s mom, whose struggles with depression and resulting lack of support for her children when they were small have left Ari with a sour feeling about her mom. The relationship evolves in a sympathetic and believable way as the story unfolds.

I was initially put off by the way Ari’s boss, who had mostly ignored her before, suddenly became so chummy. There’s a reason for that, though, and the revelation makes perfect sense.

Ari grows and learns more than Russell does, but that fits the way they’re established. Both learn something about themselves as they move forward. It’s an emotional journey leavened with humor, and the story moves at a good pace.

Tell me what you're reading this Monday.

One randomly chosen person who posts a comment before 11:00 PM, April 13 will receive a print copy of Weather Girl.