Tour Review - - Summer at the Cape 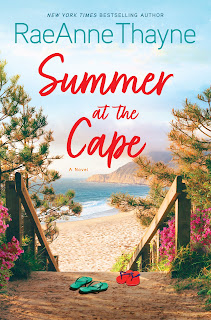 Summer at the Cape is the fourth original hardcover from New York Times, USA TODAY, and Publisher's Weekly bestselling author RaeAnne Thayne. With the emotional pull of Debbie Macomber, Barbara Delinsky, and Susan Wiggs, RaeAnne tells the story of the Porter sisters, Cami and Violet, who come together to mourn the death of Violet's twin, Lily. Over the course of the summer, the sisters must make peace with each other and also individually with their free-spirited, outspoken, activist mother who left their father two decades earlier.

As the older sister to identical twins Violet and Lily, Cami Porter had always been the odd sister out. The breach became even stronger when her parents split up—while the twins stayed in Cape Sanctuary with their free-spirited activist mother, Rosemary, fourteen-year-old Cami moved to L.A. with her by-the-book attorney father, Ted. Nearly twenty years later, when Cami gets the tragic news that Lily has drowned saving a child, Cami returns to her childhood home—her mother and Violet need her.

Lily had spent her entire life looking for something to be passionate about, and in leasing a property from neighbor Franklin Rafferty and setting up Coastal Pines Glamping, she was about to see her dream realized. Following her death, the sadness and grief Rosemary, Violet and Cami feel is compounded by Jon Rafferty, son of the neighbor whose land Lily had leased. Jon, who hadn't seen his father in years, is stunned to learn that his father is in the early stages of Alzheimer's Disease, and he worries that the Porter women took advantage of him. But Jon can see that the Porter family is in mourning, and agrees they can keep the land through the summer, and then they'll need to shut the glamping site down.

Then there's Violet—the child Lily saved, Ariana Mendoza, is the daughter of Violet's former high school sweetheart, Alex Mendoza. She could never forgive him way back when for cheating on her, but she is so grateful that his adorable little girl is okay. Alex still has feelings for Violet, but he is overcome with grief and gratitude at the same time for the loss of Lily, who died saving his child.

PJ's Thoughts:
RaeAnne Thayne writes with compassion and empathy, never failing to take me on an emotional journey. In Summer at the Cape, she explores the dynamics of the Porter family as they each deal, in their own ways, with the emotional consequences following the death of one of their own. It's a story of forgiveness, healing, strength, and new beginnings, both as individuals and as a family.
Thayne pulled me into the story of this family from the start and kept me engaged throughout. I enjoyed the push and pull among Violet, Cami, and their mother as they confront past hurts, redefine present relationships, and move forward as a unit. Family dynamics, especially those with emotional cracks, create greater depth in a story. Thayne is a master at writing them and, in this book, not only for the Porters. There are other families facing emotional reckonings of their own which are woven seamlessly into the events surrounding the Porters. I found the situation surrounding Jon Rafferty and his father especially poignant. And there are facets of Alex and Ariana Mendoza's story that were quite the surprise.
While this book is primarily focused on the journeys of Cami, Violet, and Rosemary, there are also strong romantic threads for all three women that I very much enjoyed. Thayne blended the women's fiction and contemporary romance elements together in a heartfelt story that checked all of my happy reader boxes. She created fully-developed, multi-layered characters who engaged both my mind and my heart, taking them on a journey that made me laugh, sigh, and shed more than a few tears. Then she brought them together in an epilogue that was hopeful, healing, life affirming, and sparkling with three happily ever after relationships that made my heart sing.
I highly recommend adding this one to your summer reading list.