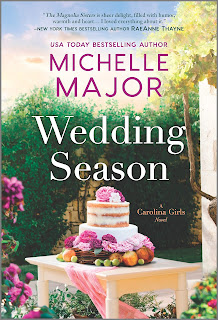 Mariella Jacob was one of the world’s premier bridal designers, but one viral PR disaster later, she’s trying to get her torpedoed career back on track in small-town Magnolia, North Carolina. With a secondhand store and a new business venture helping her friends turn the Wildflower Inn into a wedding venue, Mariella is finally putting at least one mistake behind her. Until that mistake—in the glowering, handsome form of Alex Ralsten—moves to Magnolia too.Mariella ruined Alex’s wedding by announcing that his starlet bride-to-be was sleeping with Mariella’s fiancé. While he’s furious when they’re forced to work together, there’s no denying Mariella is hardworking, talented…and gorgeous. In fact, though Alex keeps reminding himself that they’re enemies, something deeper is growing…daring them to admit that a rocky past might lead to something unexpectedly wonderful.Includes a Bonus novella! Josie Trumbull has rebuilt her life after her dreams were crushed by a career-ending injury. Now she teaches ballet in Magnolia and has mostly made peace with her life and future. Until her best friend, and proprietor of the bookstore next door, Stuart Madison, takes her completely by surprise.
Santa Says:

Wedding Season by Michelle Major takes place in Magnolia, North Carolina which is the setting of Major’s Carolina Girls series. This five star review is a guarantee that I will be visiting the other books in this series and, more likely than not, every other book she has written.

The heroine. Mariella Jacob, is by her own admission, a train wreck and, frankly, she is not far off the mark. Mariella is a refreshingly imperfect heroine. She is flawed which, to my eye, makes her all the more relatable and lovable. She has fierce friends in Emma - the owner of The Wildflower Inn and Angi - its chef and caterer who have her back. She is business partners with both. She has her own shop in town aptly named A Second Chance.

Mariella is giving herself a second chance after her life spectacularly imploded three years before. She hit rock bottom in both her personal and professional careers after she  drunkenly interrupted a high profile wedding by revealing that the bride was having an affair with her boyfriend. The bride, gorgeous in a gown designed by Mariella, was a Hollywood starlet whose PR machine managed to spin the affair making Marcella and the groom to be villains in the story. Mariella’s love life was shattered. Drummed out of her own wedding gown design company, substance abuse landed her in rehab. Magnolia welcomed her and allowed her to start anew.

However, with a runaway bride and the arrival of Alex Ralsten in town all her insecurities and failures rear their ugly heads. Alex isn’t just some incredibly handsome, successful CEO. He is also the groom whose wedding she put to a screeching halt.

Alex barely missed out on making a huge mistake when Mariella ruined his wedding. However, he did not miss out on any of the fallout from that day. His “bride’s” PR machine also turned the story around to make him a villain, too. As a result, his personal and professional integrity and honor were blown apart.

Magnolia was a logical choice for spearheading a new company. A company that will put Alex back on top. It is sheer coincidence that they both would land here. They cross paths again and again and Alex finds himself drawn to Mariella who wants nothing to do with being in a relationship with anyone, least of all Alex. She still sees herself as damaged goods but Alex sees her as something so much more.

This book had so many twists and turns in it. And history threatens to repeat itself spectacularly but not if the good people of Magnolia and Mariella’s partners and best friends have anything to say about it. There were times when I gasped out loud, yelled and cried at the pages. And there were times when I laughed joyously. Any book that can make you experience all these emotions makes it a book to run out and buy. Oh, and to explore other ones in the series. I see myself glomming Ms. Major’s backlist as well while I am at it! Happy reading!