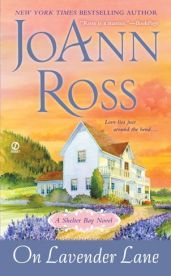 Celebrity chef Madeline Durand is in Omaha in the middle of a cooking demonstration when a sex video of her husband with his heiress lover goes viral. While her heart is not exactly broken since there has been evidence for some time that her marriage was in trouble, evidence she has struggled to deny, Madeline is humiliated. After a brief exchange with her husband Maxime, a pragmatic, ambitious Frenchman who offers no excuses and asks no pardon for his behavior, Madeline leaves New York behind and retreats to Shelter Bay, Oregon, and Lavender Hill Farm where her grandmother brought up the young Maddy after her parents were killed.

Lucas Chaffee, a former Navy SEAL medic, has returned to Shelter Bay to bury his father at sea in a place that had served as a summer sanctuary for father and son during some rough times. Lucas and Duncan Chaffee, a renowned architect, had plans to go into business together after Lucas left the Navy and Duncan retired. They were going to restore houses up and down the West coast. Lucas has his state contractor’s license and is set to go when his father’s death puts an end to that dream. Sofia DeLuca, who befriended the Chaffee father and son when Lucas was a young teen, knowing Lucas is at loose ends, asks his help in remodeling Lavender Hill Farm to include a restaurant. If Sofia, who has little faith that her granddaughter’s marriage to Maxime will prove lasting, harbors hopes that Lucas and Maddy, who were once in love, will get together, she’s not telling.

Lucas broke Maddy’s heart ten years ago. She’s never forgotten the wonder of first love, the pain of its end, or the man responsible for both. The last thing she wants as she tries to decide where she’s going with her career and her personal life is Lucas Chaffee around confusing her, and she lets him know in graphic terms what she thinks of him. Lucas knows it won’t be easy to win Maddy’s heart again, but he’s determined enough to tell the truth about what broke them up, grovel as much as necessary, and announce from the get go that he has marriage in mind. Rebuilding a friendship and reigniting an attraction prove easier than Lucas thought, but even love might not be enough to persuade Maddy to risk marriage again.

On Lavender Lane is the third in Ross’s Shelter Bay series, following One Summer and The Homecoming. Shelter Bay has become one of my favorite fictional small towns. The series has many of the qualities that made me fall in love with Robyn Carr’s Virgin River books: a town that seems real and likeable, recurring secondary characters who ground the community, and tough ex-military heroes with tender hearts. Since reunion romances are my favorites, I loved the premise of this one. Since Maxime is such a super jerk, I wasn’t even bothered by the fact that Maddy is involved with Lucas before she is technically a free woman. I was especially pleased that before she thinks of building a life with Lucas, Maddy discovers who she is and how she has allowed Maxime to turn her into Madeline, a person quite different from chef and the woman Maddy wanted to become. I loved Lucas—his determination, his charm, his willingness to do whatever he needed to do to prove himself to Maddy—and I loved Scout, Lucas’s PTSD-suffering dog.  Most of the secondary characters add interest to the story without distracting from the central relationship. I enjoyed seeing the couples from earlier books and characters whose stories I hope to hear more of in future books.

All that kept On Lavender Lane from being a five-star read for me was the subplot. Interesting and important on its own merits, it just never seemed to fit into the main plot smoothly. I felt as if it jerked me out of the story in which I was most invested, and the tie-in with Maddy and Lucas’s story seemed forced, thinly developed, and unnecessary. Despite this complaint, I enjoyed the book and recommend it to fans of small-town romances. The opening sentence alone is enough to make me glad I read the book: “Madeline Durand was braising short ribs in an Omaha department store when her husband’s sex video went viral.”

On Lavender Lane can be read as a standalone, but I recommend all three books. As for me, I’m ready for Book 4, Moonshell Beach, scheduled for release in July.