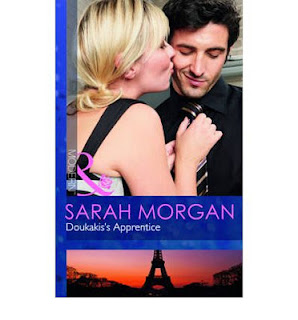 Hello, everyone! It's been quite a while since I've done a Harlequin roundup (checked and seems to be way back in June last year). So I thought I'd do a quick swing around some short contemporaries that I've recently really enjoyed, and either share some favorites of yours or introduce you to some new authors and lines you may not have previously considered. All of these books are still available from online retailers and as e-books so they shouldn't be too hard to find.

So buckle your seatbelts!

First up is one of the best Harlequins I can remember reading for ages. I grew up reading the equivalent of Harlequin Presents. Oh, how my heart would beat faster at the thought of a new Anne Mather or Violet Winspear. Sarah Morgan's books have that same classic feeling of alpha male meeting his match in the strong, clever woman he falls in love with. In DOUKAKIS'S APPRENTICE, mega-millionaire and all round bossy boots, Damon Doukakis, thinks he's inherited an absolute airhead assistant in Polly Prince with her new age ideas of staff creativity and plants and pets in the office. But Polly is a woman of hidden depths and Damon finds himself completely at sea with this brilliant, unconventional dynamo who teaches him a breathtaking lesson in love. Seriously, even if you generally don't like Harlequin Presents because of the occasionally overbearing heroes, you'll love this book. It's a real hoot and the chemistry between Damon and Polly sizzles like a goldfish in a frypan. I can't recommend this one highly enough! 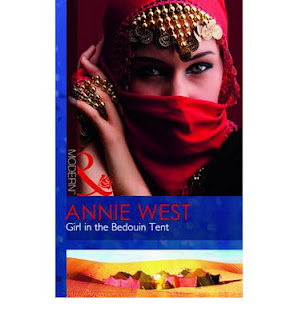 While I'm on the subject of Presents, have you read Annie West's books? Annie and I work together as critique partners, but when a book's as good as GIRL IN THE BEDOUIN TENT (isn't that a gorgeous cover?), I don't feel I'm doing any special pleading for a friend. Innocent Australian traveler Cassie Denison and dashing Prince Amir find themselves trapped in dangerous proximity in the wild desert. Annie does some of the best Sheikh books around and this is one of my favorites of hers. There's the thrill of forbidden love about the relationship between these two proud, wary people, and the sexual tension when they're trapped in a tent together with no escape on the horizon is heart-stopping. Really great stuff! GIRL IN THE BEDOUIN TENT is out in America in March. 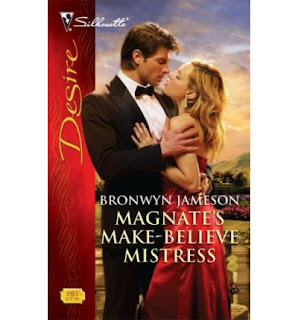 While I'm on the subject of great Aussie writers, do you know Bronwyn Jameson's work? A couple of years ago, three of Bronwyn's exquisitely crafted Silhouette Desires were up together for the RITA. Now that's some serious kudos. Bronwyn writes so beautifully, I find myself just stopping to re-read her sentences and glory in her prose. And nobody does that delicate advance and retreat of sexual tension better than she does. It's wonderful watching her characters fall in love, usually against their better judgment. But they just can't help it! In MAGNATE'S MAKE-BELIEVE MISTRESS, Isabelle Brown works as a freelance housekeeper to the rich and famous, but finds herself entangled in a dangerous game of mistaken identities when she takes a job for intriguing, sexy Argentinean playboy Cristo Veron. You'll have great fun with this one. Cristo and Isabelle are great characters who will linger in your mind. 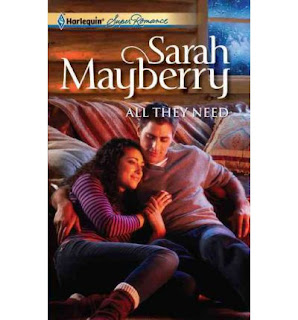 Sarah Mayberry is one of my favorite authors and her latest SuperRomance ALL THEY NEED is one of her best, I think. There's such depth of emotion in this story. Melanie Porter was once a vivid, vibrant woman but years with a bullying husband have sapped her spirit. She decides to abandon the high society where she's never felt at home and set up a bed and breakfast on the beautiful Mornington Peninsula near Melbourne. Rich boy Flynn Randall belongs to that luxurious world Melanie has fought so hard to escape and his arrival in her life threatens all her dreams of independence and finding herself again. Or does it? Perhaps Flynn is deeper and more worthy than she believes. Perhaps he offers Melanie the chance of personal fulfilment that she came so close to losing. A beautiful story of two people who have to take dangerous emotional risks to achieve their happiness. 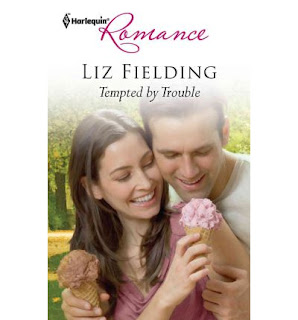 Liz Fielding is another of my favorite authors and she's never let me down yet. But even a favorite author occasionally writes a book that slams that ball out of the park and into the next suburb. TEMPTED BY TROUBLE is longer than most Harlequin Romances as it was originally written to launch the new Riva line in the U.K. There's a definite Cinderella touch to this story of Elle Amery who has put her life on hold to raise her sisters. But what's nice about this story is that it never quite goes where you think it's going to - for example, Elle's sisters really aren't ugly either inside or out, and in fact emerge as wonderful characters in their own right. Into Elle's life rides Prince Charming Sean McElroy. And seriously, girls, he is CHARMING with a capital 'ch'! One of the nicest heroes I've ever read - I wish he lived next door to me! Sean's gallant steed isn't a white charger but a pink ice-cream van called Rosie who also becomes a character in her own right. This book is such a charmer. You won't be able to resist it! It's as delicious as Rosie's ice-cream! 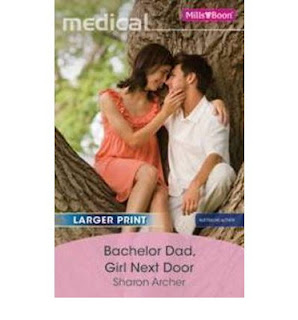 I don't read a lot of Mills and Boon Medical Romances and I know they can be difficult to find in America, but there are a couple of authors who are auto-buys for me. Strangely they're all Aussies! Don't know what it is about Australians and sexy doctors!

Sharon Archer writes heartfelt romances set in Australian country towns. A large part of the pleasure of reading one of her books is getting to know the bush community where the story is set. One of my favorites of hers is BACHELOR DAD, GIRL NEXT DOOR which is a story about second chances and forgiveness and finding your place in the world. After his wife's death, Dr. Luke Daniels brings his young daughter back to the beautiful seaside town of Port Cavil while he wonders how to rebuild his life. He doesn't count on meeting the girl who enchanted him as a young man. Even more troubling, he finds himself still attracted to her. Terri Mitchell is now an A&E doctor and she's far from sure she wants to risk her heart again with her teenage crush, Luke. Especially as it's perfectly clear that Luke never wants to fall in love again after losing his wife so tragically. You'll close this one with a happy sigh and a smile. 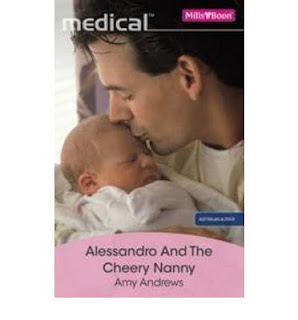 Amy Andrews, another Aussie, is a practicing nurse who writes dramatic and very sexy books that buck the stereotype of Medicals being all sweetness and light. So please don't be fooled by the rather corny title of this book (seriously, Harlequin, this has to be one of the WORST titles ever!). ALESSANDRO AND THE CHEERY NANNY is the first in a two-parter with VALENTINO'S PREGNANCY BOMBSHELL (which isn't much better as a title, frankly!). It's another story about a father bringing up his child, in this case a four-year-old son, after the death of his wife. When brooding Italian A&E doctor Alessandro Lombardi encounters vibrant nurse Natalie Davies, he doesn't realize just how profoundly Nat will change his life and that of his withdrawn son Julian. Another one you'll close with a smile and a sigh of pleasure.

So do you read Harlequins? What are your favorite lines? Why? Have you read any good category romances lately?
Posted by Anna Campbell at 12:02 AM