Today we welcome romantic suspense author Leslie Tentler to the Romance Dish! Leslie is the author of the critically acclaimed Chasing Evil trilogy from MIRA Books (Midnight Caller, Midnight Fear, and Edge of Midnight). To celebrate the release of the third book in the series – Edge of Midnight – she’s giving away a free copy. Comment below to enter for a chance to win! Welcome, Leslie!

Have you ever fantasized about winning the lottery? You know, finding out the ticket you bought at a convenience store is worth...bazillions of dollars? What things would you buy or what exotic places would you travel to? Would you share the wealth with family or chosen charities?

Would you quit your job?

We’ve all heard stories on the news about lottery winners who plan to keep working despite the windfall they’ve just received. For some, money isn’t everything. They feel the drive to work or to follow the call of their chosen profession.

That’s also the case for special agent Eric Macfarlane in Edge of Midnight. He works for the Violent Crimes Unit of the FBI, where he handles grim cases on a daily basis. The pressure within the unit is huge. It demands an inordinate amount of time and takes all of what he has, professionally as well as emotionally.

I’ll also tell you a secret about Eric: He’s one of those people who works not because he has to, but because he feels the calling. He’s from a prominent, affluent family and could just as easily be living a playboy lifestyle. But law enforcement runs deep in his veins. He believes in justice and the motto of “to serve and protect.” It’s all he’s ever wanted to do.

But now his need to work goes beyond a professional responsibility. You see, a serial killer took someone very special to Eric before disappearing into thin air. That was nearly three years ago. And now, a new killer has surfaced in Jacksonville, Fla., with a very similar M.O. He’s working the beaches, abducting women and killing them. Eric believes it’s the same person and he wants to be on that case, despite his very personal involvement. And – to hell with FBI protocol or what the SAC has dictated – he has the connections within the Department of Justice to get there.

The one thing Eric doesn’t count on, however, is a new emotional entanglement. For the first time, there’s a survivor of the killer. She escaped, and the psychopath known as “The Collector” wants her back in the worst way...

I’d like to think that if I won the lottery, I’d keep working, keep writing and keep telling stories. It’s a creative outlet and it gives me pleasure to write a story that entertains or thrills, or touches readers’ hearts. I’d also like to think that instead of buying myself an island somewhere or having a different sports car for every day of the week, I’d share my good fortune with the people and the causes that matter most to me. But I would buy a house somewhere on the water’s edge. That’s one thing I’ve always wanted.

What about you? If you came into a truckload of cash, what would you do? Leave a comment below for a chance to win a copy of Edge of Midnight. 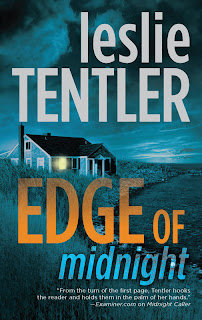 
The writer becomes the story when crime reporter Mia Hale is discovered on a Jacksonville beach – bloodied and disoriented, but alive. She remembers nothing, but her wounds bear the signature of a sadistic serial killer. After years lying dormant, The Collector has resumed his grim hobby: abducting women and taking gruesome souvenirs before dumping their bodies. But none of his victims has ever escaped – and he wants Mia back, more than he ever wanted any of the others.


FBI agent Eric Macfarlane has pursued The Collector for a long time. The case runs deep in his veins, bordering on obsession...and Mia holds the key. She’ll risk everything to recover her memory and bring the madman to justice, and Eric swears to protect this fierce, fragile survivor. But The Collector will not be denied. In his mind, he knows just how their story ends.

What RT Book Reviews Says About EDGE OF MIDNIGHT

“A compelling plot, thick suspense, a cunning villain, a shattered cop and a victim who wants answers at any cost place Tentler in the same category as bestselling authors Lisa Jackson and Beverly Barton.”

Leslie Tentler worked in PR as a writer and editor for nearly two decades before pursuing her love of writing fiction. She is the author of the Chasing Evil trilogy of romantic thrillers from MIRA Books, which includes Midnight Caller, Midnight Fear and Edge of Midnight. She lives in Atlanta.

Comment to win one (1) copy of Edge of Midnight. Winner’s choice of e-book or print book. **Print option open only to U.S. residents.**
Posted by Andrea at 1:33 AM