I had laptop problems yesterday and wasn't able to get these reviews posted.  So welcome to Stock Up Saturday...on Sunday! :)

Haunted by the wartime secrets that have hardened his soul, Luke Ripton has vowed never to return to Spain but he left something behind when he came home to England following the war:  the young girl he rescued and married to keep her safe from her unscrupulous cousin.  Leaving her with her aunt in a secure mountain convent, they agreed that Luke would obtain an annulment when it was safe but eight years later a letter arrives that makes it clear that he has no choice but to travel to Spain to claim his secret bride.  At least he has the consolation of knowing that, after being raised in a convent, Isabella will be a sweet, biddable wife with no objection to leaving Spain immediately for Luke can't bear to be there any longer than necessary.

Smart and courageous, Isabella secretly kept the residents of the convent from starving during the war. But bored to tears with the other aspects of convent life, this tomboy who despairs of ever being a desirable woman romanticizes her young girl's memories of the handsome, carefree English lieutenant who rescued her and dreams of the day he will return to claim her hand and vow his undying love.  Reality comes calling when her "prince" turns out to be an autocratic ex-soldier, resigned to keeping the wife he never really wanted.  To make matters worse, Luke announces they will be leaving immediately for England but Isabella has a mission to complete; one that will take them deep into the region of Spain that Luke never wants to visit again, and she's determined to go - with or without her husband.

Bride by Mistake is the fifth book in Gracie's Devil Riders series.  I've waited a long time for Luke's story and I wasn't disappointed.  Gracie takes Luke and Isabella on a fast paced journey across Spain where they both confront the ghosts of their pasts and gradually begin to see themselves through the eyes of the other, opening their hearts to hope, happiness and love.

Christina Brooke continues to shine with the second book in her Ministry of Marriage series, Mad About the Earl, an absolute delight of a Beauty and the Beast tale.

When Lady Rosamund Westruther travels to the country to meet the man to whom she has been betrothed, she quickly discovers three things:  he's huge, he's rude and, with one passionate kiss, he (unknowingly) claims her heart for his own.  Returning to London after the betrothal papers are signed, Rosamund patiently waits for Griffin to come for her.  And waits...and waits...and waits...until patience disappears and a stubborn resolve takes its place.

Growing up in an all-male household with an abusive grandfather, Griffin deVere, Earl of Tregarth knows little to nothing about romancing a lady.  To make matters worse, he's been told his entire life that he's ugly, clumsy and completely undeserving of  love.  He's sure that a petite, exquisite beauty like Rosamund, a lady to her core, could never be happy with a man like him yet, when his beloved sister's happiness is at stake, he has no choice but to travel to London and seal the deal by marrying the lovely lady.  Imagine his surprise when the lady turns out to have a spine of steel and a few conditions of her own before she'll consent to become his bride; conditions that require Griffin, a man more at home in the stables than the ballroom to publicly court her before claiming her.  For Rosamund has a higher goal in mind than a mere wedding.  The beauty who has lost her heart to the beast is determined to show him that he is a man worthy of love and a man who has love to give.

I read this book in one day and enjoyed every delicious bit of it.  Griffin and Rosamund are a wonderful couple and Brooke has surrounded them with a fascinating cast of secondary characters.  We get to know the male cousins better which has me even more excited about reading their stories and the excerpt from Cecily's book, A Duchess to Remember, has me wanting her story now!

Mad About the Earl stands well on its own but if you enjoy it as much as I did, you'll probably want to pick up a copy of the first book in the series, Heiress in Love too. 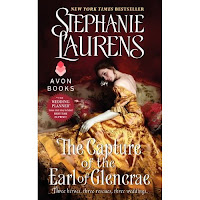 The Capture of the Earl of Glencrae is a fast-paced, adventurous road romance that is Stephanie Laurens at her very best.  From the glittering London ballrooms in the very heart of the Cynster family to the remote wilds of Scotland and a woman who lives to make one particular Cynster matriarch suffer, you won't want to miss a minute of this journey!

Dominic, the Earl of Glencrae is an honest, loyal and honorable man.  He does not want to kidnap and ruin a Cynster sister but he has no choice.  To save his clan from ruin at the hands of his cruel and devious mother, Dominic must do as he's been instructed.  The people he hired to kidnap the two older sisters bungled the job, though it ended happily for them as they fell in love with good men and are both now engaged and safe, thanks to Dominic's efforts.  After all, he hadn't intended to actually ruin them but to obtain their help in thwarting his mother's plan while offering marriage in return.  But with them out of the picture, the only sister left is Angelica, the baby of the family.  The one sister Dominic did not want to have to deal with as he can only imagine how spoiled and pampered the youngest daughter of a Cynster family must be.  Oh, Dominic, are you in for a surprise!

Angelica Cynster is a hellion.  There's just no better word for it.  Headstrong, stubborn, intelligent and loyal to the core, she's the first to jump into adventure and the best one to get you out of a scrape.  Like her older sisters, she is confident she'll recognize her hero when she sees him and when she spies the Earl of Glencrae across a crowded ballroom, her heart immediately recognizes its mate. She maneuvers an introduction and a walk in the garden but imagine her surprise when the romantic stroll ends with her being bound and stuffed into a carriage!  It doesn't take long for her to realize that her hero is none other than the mysterious Highland Laird who has been plaguing her family but don't despair, dear readers.  Our industrious Angelica quickly figures out there must be a good reason for his actions and joins forces with Dominic and his small corps of servants as they attempt to keep her family at bay while saving the Earl's clan.  Plenty of twists and turns keep things interesting along the way as well as long-held family secrets that reveal the root of the hatred Dominic's mother holds for the Cynsters.  There are also heart stopping moments, plenty of laughter and a truly sigh worthy ending.

You don't have to have read the previous two books before reading this one but, for a better understand of the Earl's motives, I strongly recommend reading them in order:  Viscount Breckenridge to the Rescue, In Pursuit of Eliza Cynster and The Capture of the Earl of Glencrae.

Email ThisBlogThis!Share to TwitterShare to FacebookShare to Pinterest
Labels: Anne Gracie, Bride by Mistake, Christina Brooke, Historical, Mad About the Earl, PJ, Reviews, Stephanie Laurens, Stock up Saturday Reviews, The Capture of the Earl of Glencrae