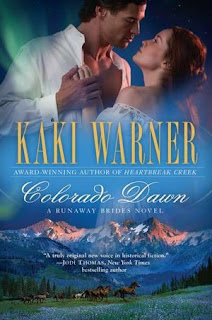 Englishwoman Maddie Wallace had high hopes when she married dashing Scottish cavalry officer, Angus Wallace but after only two letters and one visit during their six-year marriage, Maddie has had enough.  Tired of being looked down upon by the Wallace family for being English, virtually abandoned by her husband and feeling alone in the world, when Maddie returns to England to settle her parents' affairs following their sudden deaths she decides to follow her passion for photography and embark upon a new life.  Posing as a widow, she accepts an assignment from a London paper to photograph the American West, leaving her absent husband and her old life far behind.

All Angus (Ash) Wallace has ever wanted is to be a soldier but when a serious injury forces him out of the military after a long career he returns home to Scotland to discover that everything he left behind has changed.  He's now heir to an earldom he never wanted and the sweet wife he expected to welcome him home with open arms has decamped to another continent.  Determined to reclaim her, Ash sails to America then tracks his wife to Heartbreak Creek, Colorado, confident in his ability to bring Maddie home to Scotland and set about siring some heirs.  After all, he's commanded military troops for years.  How much trouble can one wife be?  As we come to discover in this story, quite a bit!  What he finds is an independent woman, surrounded by a "family" of her own making while pursuing the career that gives her life meaning in a wild, challenging, soul-inspiring land.  His quest to reclaim his wife is suddenly fraught with complications Ash could never have envisioned.

As the two spend time together, sharing thoughts and dreams that they never had time to talk about before and revealing secrets that change each of their perspectives on the early years of their marriage they gradually come to realize that the feelings they held for one another have not gone away.  In fact, they've grown stronger but the issues that keep them apart still remain.

Laughter showed in his eyes.  "I've missed you, Maddie, so I have."  His smile faded into something raw and unfamiliar to her.  "Dinna run from me again, lass.  I couldna bear it."
Tears pressed behind her eyes.  Biding time until they passed, she traced a fingertip over his lips.  "I didn't run.  I drifted away.  And you let me."
"I ken I was wrong.  But I'll not be doing that again.  I swear it."
In that unguarded moment, she glimpsed the brash, handsome, young man who had captured her heart six years ago.  Who held it captive still.
Yet, nothing had changed.

Will Ash be able to earn Maddie's trust that he won't abandon her again?  Will they be able to reconcile Maddie's bone-deep need for her photography with Ash's duty to the earldom?  Once Ash sees for himself how much Maddie's photography means to her and feels the emotions conveyed through her unique talent, will he be able to bring himself to take that away from her by insisting they return to Scotland even though duty to his family demands just that?  For English and Scottish society would never allow her to continue taking photos, the craft that brings her such happiness, as illustrated in this passage between Angus and Mr. Satterwhite, the elderly man who accompanies Maddie on her photographic excursions into the mountains.

"You'll kill her."
Ash blinked, "I'll what?"
"Missy has a kind and gentle heart.  You can see it in every picture she makes.  It's in the way she looks at the world.  Hell, in the way she looks at me - a broken-down old man with eyes that make children duck behind their mother's skirts.  She sees beauty in us all.  And you would take that away from her."
"Haud yer wheesht!" Ash shouted, his accent getting away from him.  "I wouldna dae any sech thing!"
"You take away her photography, you take away her joy.  Is that what you want?"

Set against the ruggedly majestic backdrop of the Colorado Rockies, Kaki Warner has written a stellar addition to her Runaway Brides historical western series. Filled with passion, adventure, heartbreak and humor, Colorado Dawn is a story that had me sighing, crying, holding my breath and laughing out loud.  Warner has the ability to pull me into her stories, making me care for her characters; investing my emotions in their happiness.  I adored Ash and Maddie!  Ash is a wonderfully complex hero; one of my recent favorites.  As a military man of many years, his "take charge" personality and black/white point of view are firmly ingrained yet he has gentle, nuturing layers and a well-hidden vulnerability that are gradually revealed as well as a terrific sense of humor. I had to chuckle at the poor guy's attempts to apply his military tactics to civilians.  It worked with his troops so why not his wife or Edwina and Declan's family of unruly children?  Watching his confusion when they ignored him and went on their merry way or answered his orders with a chorus of "why's" was such fun.  After existing in the shadow of Ash's family for so many years, it's immensely satisfying to watch Maddie grow and find her place in the world.  I was so proud of her, applauding her courage and the woman she had become yet my heart ached for how she was torn between her love for Ash and the new life she had carved out of the Colorado wilderness.  I honestly didn't know how Warner was going to work out the issue between Ash and Maddie but I should have had faith for work it out she did and to my immense satisfaction.

Characters from Heartbreak Creek (first in this series) are seemlessly woven into the fabric of Colorado Dawn, figuring prominently in Ash and Maddie's relationship and setting the stage for the next book in the series.  As in the first book, the friendship among the four women (Edwina, Prudence, Maddie and Lucinda) continues to have a prominent role in their lives.  Declan and Thomas have been good friends for years and have a protective interest in all four women which makes the entry of Ash, a new and unknown entity thrown into the middle of their "manly midst", especially fun to read.  Prudence and Thomas's relationship also progresses in this book and has me anxiously awaiting the rest of their story (which began in Heartbreak Creek).

Kaki Warner has published five books and I have loved each and every one of them.  Her excellent writing (as evidenced by two RITA nominations and one win last year) continues to improve with each book she pens.  If she keeps getting better, I may have to create a special rating just for her!  If you love sweeping, character-driven stories set in the American West that are filled with adventure,  humor and deeply satisfying emotion then any book by Kaki Warner is the book for you.

As each of Kaki's books within a series builds on the previous book, I strongly recommend reading Heartbreak Creek (read Janga's review here) first followed by Colorado Dawn.