Review - - How to Dance With a Duke 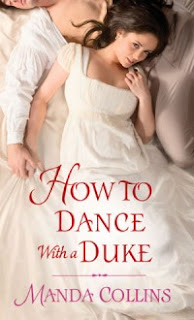 How to Dance With a Duke
The Ugly Ducklings - Book 1
By Manda Collins
Publisher:  St. Martin's
Release Date:  January 31, 2012

Miss Cecily Hurston wants answers and the only place she can get them is inside the Egyptian Explorer’s Club. But, as an unmarried female, she is barred from entrance because of a rule put in place by her father, the man she is now desperate to help. Her father returned from his last trip to Egypt seriously ill, unable to speak and missing his secretary amidst rumors of a nasty falling out and possible murder. To clear him of suspicion and find out what really happened on the trip, Cecily must gain access to her father’s journals even if that means she has to allow her beautiful step-mama to transform her appearance from a bluestocking ugly duckling into a swan in order to do it. Cecily has no interest in love – she’s been burned badly before – but if she has to marry a dull and boring member of the Egyptian Explorer’s Club to get her father’s journals, that’s what she’ll do!

A soldier and war hero, Lucas Dalton, Duke of Winterson is the season’s prime matrimonial target though he has thus far shown no marked interest in any one girl. All of his efforts are focused on finding out what happened to his younger brother, William who disappeared while on Lord Hurston’s latest Egyptian exploration but he’s been thwarted at every turn. Fate finally smiles upon him when he observes a young lady being unceremoniously tossed from the doorway of the club, a lady who turns out to be the daughter of the man who has the answers Lucas needs. Not handling their first encounter very well, Lucas determines to be more congenial the next time they meet, which happens at a ball later that evening, but he is stunned by the transformation of the drab little bird who accosted the door of the Egyptian Club that same afternoon into the beauty before him and asks her about it.

“I will tell you my reasons,” she whispered conspiratorially, “but you must keep this between the two of us.”
The duke leaned forward as well, eyebrows raised in expectation.
“I did it…” she hissed, “because I mean to marry a member of the Egyptian Club.”
“The devil you will,” Lucas said, resisting the urge to take Miss Hurston by the shoulders and shake some sense into her.
The idea of her marrying some prosy scholar with more hair than wit was ridiculous. Not only because she deserved better, but because there had to be a better way for her to get her hands on her father’s journals. It had nothing at all to do with the way she looked in the moonlight and the way his eyes kept straying to her mouth.

Lucas offers to help Cecily weed out the undesirables among her marriage candidates, knowing full well that this intelligent, clever, vibrant young woman, who doesn't seem to realize how very special she is, would never be happy with any of them.

"They have simply taken me up as their newest fashion.because they saw me dancing with a couple of smart, young gentlemen at the Bewle ball," she explained.  "I believe they see me as something out of the common way and are diverted by the novelty of conversing with a sensible creature for a change. They certainly are not doing so because they find me attractive. I am an Ugly Duckling after all."
"I beg your pardon, Miss Hurston," he replied, shaking his head as if in sorrow for what he was about to say.  "But as a gentleman...as a man," he corrected himself, "let me be the first to inform you that you are utterly, splendidly wrong."

The more time they spend together, the closer they become.  The hotter the attraction between them sizzles, the more Lucas begins to wonder if he might not be Cecily's perfect marriage candidate. But first, they must solve the mystery of his brother’s disappearance and the deeper they dig the more it becomes apparent that there is someone who will stop at nothing, even murder, to prevent them from discovering the truth.

This is Manda Collins' debut and the first book in a trilogy about three cousins - Cecily, Madeline and Juliet - known throughout the ton as the Ugly Ducklings.  I loved it!  It has everything I enjoy in an historical romance.  With witty banter and a sizzling attraction between the hero and heroine, a strong, supportive and intelligent relationship among the three cousins,  a fast moving plot, interesting secondary characters, a "mean girl" adversary, and a satisfying mystery, it kept me firmly glued to the pages from beginning to end.  And when I reached the end I wanted to immediately return to the beginning and start all over again!

In the interest of full disclosure, I have known Manda Collins for several years, meeting online and in person and following her writing journey since Avon Fan Lit several years ago.  I knew she had talent but I did not realize how much until I read How to Dance With a Duke.  I came away from reading this book with the same thought I had after reading Tessa Dare's debut and that is "This woman is going to be a star!"


Written with intelligence, wit and compassion, How to Dance With a Duke is a book that should put Manda Collins on the radar of historical romance readers everywhere.  I highly recommend it!