Three of my favorite category authors have new books out so, of course, I hightailed it to the store to pick up copies as soon as they were released then snuggled up last weekend for a reading marathon.  I love categories!  There are so many wonderfully talented authors writing categories, they offer a range of story lines from sweet to spicy, cover most sub-genres and I can usually read one from cover to cover in a single afternoon.   Here are my thoughts on the three books I recently read. 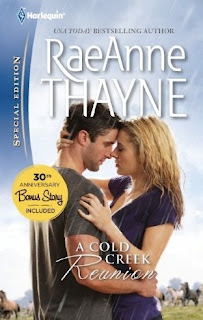 People deal with grief in different ways and ten years ago Taft Bowman dealt with the murders of his parents by shutting off his emotions and refusing to share what he was going through with his fiance, Laura Pendleton.  Unable to face a marriage to someone unwilling to share his  emotions, Laura called off the engagement a week before the wedding, moved to Spain and eventually married someone she met there.  Taft eventually emerged from his grief-induced tailspin but by that time it was too late to go after Laura.  He's dated plenty in the intervening years - enough to earn him a bit of a playboy reputation - but has never gotten over his first love.

When Laura's philandering husband is killed in an accident along with his mistress, Laura brings her children home to Cold Creek to regain her footing and help her mother run the family inn.  The last thing she envisions is getting involved with her first love but when her young son, Alex accidentally starts a fire at the inn, Fire  Chief Taft and his volunteer fire crew are first on the scene.  It doesn't take long for Taft to realize he still has feelings for Laura and her two young children quickly claim their own spot in his heart.  He's determined to show her how much the young man she left has matured and that he's worth taking a second chance on.  But Laura's experiences have made her slow to trust and Taft's (somewhat exaggerated) reputation as a ladies man doesn't help matters.  It will take a near tragedy to open her heart to the love he's offering, not just to her but to her children as well.

Thayne has written an emotional story in her Cowboys of Cold Creek series that's centered around family, lost love and second chances.  Taft is a wonderful hero; responsible, family oriented, kind, caring and sexy as all get out.  I especially liked his relationship with Laura's children, especially young Maya, a Down Syndrome child.  The interaction between the two melted my heart and added an additional dimension to the story.  It took me longer to warm up to Laura though I fell in love with her children right along with Taft. While it's usually the hero I want to whack and say, "Get over it already!", this time it was the heroine but she did eventually win me over.

I've been reading RaeAnne Thayne for years, both in category and single title, and she's never let me down 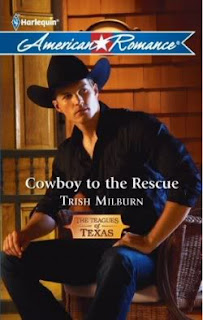 
Returning home to the family ranch after suffering serious war injuries, Ryan Teague has healed physically but still carries the emotional scars of what happened overseas.  Serious minded Ryan has become even more of a loner, preferring to spend most of his time in his workshop building furniture and carving angel figurines.

When Brooke Vincent is hired by Ryan's mother as the new ranch cook, she not only wows the family with the best food they've tasted in ages but she intrigues Ryan enough to lure him out of his cottage.  Suddenly, he's not only showing up for mandatory family night dinners but popping into the kitchen at all hours.  And Brooke, who has good reason not to trust men, finds herself drawn to this handsome man with the unseen wounds.  They slowly grow closer, trust - and love - begin to form and Ryan finally shares his war experience with Brooke and the reason for the pain in his soul.  But Brooke can't bring herself to share her secrets with Ryan - and she has a very big one that could endanger not only her but her family and Ryan's as well.  Will he be able to forgive her for lying?  And, more importantly, when the danger from which she's been running finally catches up with her, will he find her before Brooke, or someone very close to her, gets hurt?

Milburn tackles two very sensitive and deeply emotional topics in this story:  Post Traumatic Stress and domestic abuse.  Ryan and Brooke are both dealing with PTSD and running from the sources of it, though Ryan is running emotionally while Brooke's solution is to change her name and physically disappear.  Both discover that the only way to fight the emotional wounds of their experiences is to face them head-on,  And to overcome them, they must find the strength and courage to open their hearts to love and trust one another enough to share their innermost secrets.

I love this family!  Ryan and Brooke's story is the second of three centered around the Teagues and their three sons.  You don't have to have read the first book, The Cowboy's Secret Son, before reading this one but I'll be surprised if you don't go looking for it once you meet the Teagues.  And you won't have long to wait for the third book in the series.  The Cowboy Sheriff will be released May 1st. 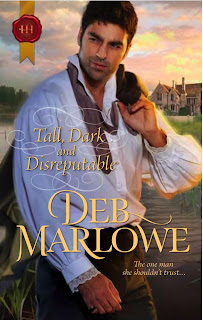 
I don't know who the cover model is on this book but Deb Marlowe should request him for every book she writes.  I fell for him long before I opened the book and began reading!

Portia Tofton has been in love with Mateo Cardea since they were children but young Mateo, who valued her friendship, was oblivious to her tender feelings.  Then an ill-conceived plan by their fathers to marry them to one another was rejected by Mateo, unknowingly breaking Portia's heart in the process.  Portia, desperate to escape her overbearing father and brothers, married a man who turned out to be much worse than her male relatives.  But, after he has the decency to get himself killed while behaving recklessly with his mistress, Portia discovers he's gambled away the home and estate left to her by her aunt; the home, estate and gardens that she has lovingly restored and from which she now faces eviction.  The only person she can think of who can possibly help her regain her home is her childhood friend, Mateo and she's not above using blackmail to gain his assistance.

Mateo loves the sea and has devoted his entire adult life to his family's shipping company, knowing that one day it will be his but that all changes with the reading of his father's will.  On the verge of the biggest business deal of his life, he discovers that his father has left controlling interest in Mateo's family company to Portia Tofton!  Mateo travels from Baltimore to England to convince Portia to sell the company back to him as quickly as possible so he can salvage the business deal but she offers a trade instead.  Confront the man her late husband lost her home to and buy it back and she'll give him back the shares in his shipping company that she's inherited.  Sounds easy, right?  Not so fast!  First, Portia has no intention of being left behind.  She's had enough of being treated like a second class citizen and, determined to be an equal partner in the search, she dogs Mateo's every step.  Second, what first seems easy turns out to be anything but.  With twists and turns aplenty, Mateo and Portia are sent on one wild goose chase after another until they begin to wonder if they will ever find the mysterious person who apparently doesn't care to be found.

In the meantime, the enforced proximity gives them the opportunity to rekindle their friendship and, as adults, they begin to realize that what they feel for one another is something much deeper than just friendship.  But their lives are worlds apart.  Portia's roots are in the soil and her beloved gardens while Mateo longs for the freedom of the seas.  Even though their love is deep, they both know that there's no way they can be together.  Or can they?

I really enjoyed this story!  Portia and Mateo's journey is believable and both characters are likable and deserving of their happy endings. (And I found the happy ending particularly satisfying!)  I especially enjoyed Portia's individual growth throughout the story.  An intelligent, talented woman who has never been given encouragement or recognition for her accomplishments, it was wonderful to watch her grow into a confident, self-assured woman who doesn't hesitate to fight for what she wants.   And Mateo.  ::Sigh::  Let's just say I fell in love with him right along with Portia.  (Though there were times when I wanted to cosh him upside the head...same as Portia!  lol!)

There's one fascinating secondary character who plays a pivotal role in the outcome of Portia and Mateo's relationship but, to avoid spoilers, I won't say more than that other than I really, really hope that character has a story of their own coming!


Do you read categories?  What are your favorite lines?  Favorite category authors?  Read any good categories lately that you'd like to tell us about?
Posted by pjpuppymom at 12:00 AM