There Must Be Heyer Love! 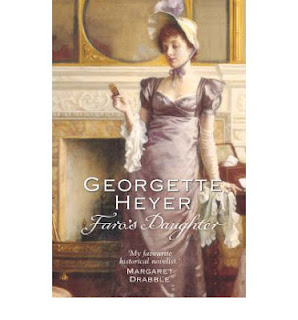 Do any 80s tragics like moi get the title pun?

Anyway, back to the Regency!

What is that glorious purr in the universe? Can it be the Ginormous Cat who curls up in the padded armchair at the heart of all happiness?

No, it's not. Although I have to say the megalomaniac who lurks beneath my modest exterior got a kick out of inventing a new mythology! It's me doing another Georgette Heyer fest for this month's review.

We always have wonderful discussions here when it comes to one of the goddess's books - and today I thought I'd talk about two of her works. So on mathematical principles, we should have a discussion that's twice as good!

FARO'S DAUGHTER is a bit like one of those French farces with everybody popping out of doors and out from under beds all over the place. It's VERY funny and definitely a comedy of errors.

Max Ravenscar is one of the richest men in England and a noted sportsman with no desire to marry. This ruthless plutocrat is drawn into a scheme to separate his young cousin, Lord Mablethorpe, from the unsuitable woman he wants to marry, Deb Grantham who works at an upper-crust gaming house. Unfortunately for Max, Deb is just the kind of woman to attract his interest and not at all the kind of woman to let him get away with his usual commanding ways. Spiraling chaos ensues, including a kidnapping, young lovers, elopements, a runaway heiress, several dotty female relatives (G.H. does wonderful dotty female relatives!), plot and counterplot, a carriage race, misunderstandings galore. And all of this in a mere 260 pages! I'm in awe of the goddess's tight grip on events and character so that she can tell a satisfying story with a lovely romance (well, lovely in the sense of combatants tumbling into adoration!) within this space. Definitely worth reading if you're in the mood for madcap sparkle and Regency highjinks. 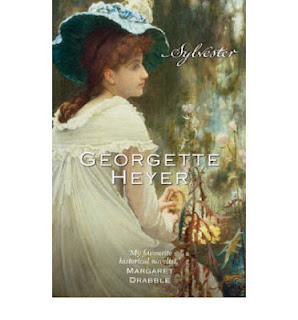 SYLVESTER: OR THE WICKED UNCLE is another fun read. Sylvester, Duke of Salford, is convinced he's a really good guy; nobody in his world has the guts to point out to him that he's actually insufferably condescending. When he decides to get married, he puts together a list of five incomparables, none of whom QUITE match his high stickler requirements, with one addition, Phoebe Marlow, the daughter of his mother's best friend. Sylvester is marrying partly to please his mother so he sets out to Lord Marlow's house to inspect this chit and see if she makes the grade.

Phoebe has had one unsuccessful season when she danced with Sylvester, not that he deigned to remember this when he saw her the next night at Almack's. Phoebe, whose home life with a bullying stepmother is unhappy, has plans of making a living as a writer and has just had her first manuscript accepted. Unfortunately, the villain of this piece is based on Sylvester who has very distinctive eyebrows. Even more unfortunately, the villain of this piece has a nephew he's tormenting. Unbeknownst to Phoebe, Sylvester is guardian to his own nephew over whom he's conducting a custody battle with his mutton-headed and flighty mother. Society is quick to make the link when Phoebe's book comes out and imagine Sylvester guilty of all the sins of Count Ugolino in the novel.

When Phoebe runs away from home to avoid marriage with a man she considers overbearing and selfish, Sylvester starts to get an inkling that he's not as universally adored as he thought. As his relationship with Phoebe develops, his amour-propre receives so many hits, you almost feel sorry for him in the end. Well, in between laughing at his dire straits. One of my favorite bits is when he's forced to cope alone with a sick and cranky child he's rescued from France.

By the end, Sylvester is a better man and Phoebe is a stronger woman who has come into her own. You just know these two are going to be great together as the Duke and Duchess. Big sigh of happiness from this reader.

So have you read these two? Any preference? Both FARO'S DAUGHTER and SYLVESTER feature heroes who have learned the error of their ways by the end. Love that trope! Any favorite arrogant heroes in romance fiction who get their comeuppance? Let's talk bringing down the uppity hero today!
Posted by Anna Campbell at 12:03 AM