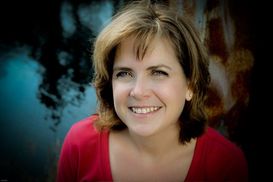 It's my pleasure to introduce historical author Genevieve Graham to The Romance Dish today.  A graduate of the University of Toronto with a degree in music performance,  Genevieve now lives in Nova Scotia where she splits her time between 18th century characters and her 21st century husband and daughters.  She's here today to blog about her debut novel, Under the Same Sky.  Welcome, Genevieve!

Once upon a time I sent my little princesses off to elementary school on the big yellow carriage, kissed my Prince Charming, and headed into the basement. Fortunately, all the cinders had already been emptied, the mending finished, and the little cartoon birdies had finished singing on my shoulders. So, enjoying a rare moment without chores, I sat at our one and only desktop computer and stared at the screen, waiting for magic. 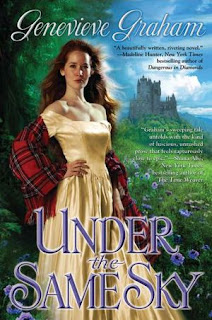 When it came, spinning from my brain onto the screen in living, breathing, technicolour adventures, I was amazed. “Under the Same Sky” was the first thing I’d ever written, and I’d done it just for fun. In my mind I was introduced to Maggie, and she showed me her life, as miserable and strange as it was. The next day I was thrown into a bloody battle scene in Culloden Moor in 1746. I helped Maggie reach out and bring both hope and strength to the man she’d dreamed of all her life. No shining armour in this story, no castles, no pumpkins. But adventure? Love? Hope? Oh yes.

Since I had so much practice working hard at scrubbing floors and making little outfits for talking mice, I had no trouble working hard on the book, researching, editing, learning what “real” authors did. When I showed the completed book to my family and friends, they seemed to like it (though they’re kind of obliged to at least say that). Why stop there? I started querying agents. That’s when I almost gave up. Everyone else seemed to be going to the ball, getting published, seeing their books in stores. But rejection after rejection kept arriving in my email. Then, just when I feared all was lost, my fairy godfather appeared, in the form of my wonderful agent, Jacques de Spoelberch. With a wave of his magical pen he made the impossible possible: Penguin bought not only my first book, but my second as well.

So it’s only fitting that my book revolves around dreams as well. When I sign books, I add “Believe in dreams” to my name, because sometimes they actually come true.

SERIOUS note: I should probably warn you here: “Under the Same Sky” is not a romance like mine was. Despite the beautiful cover, my story is not what it seems. I can’t write light romances, nor can I write predictable ones. My stories are dark and often difficult, dealing with real life tragedies and experiences people had to survive. Especially back in the 18th century. When you wish upon a star, sometimes Fate will see you though. Sometimes, though, she’s busy with someone else’s miracles and you’ll have to make them happen yourself. “Under the Same Sky” is just a little bit different that way, though. Since the couple can communicate through dreams, they get a little more assistance from each other along the way.

Knowing you might someday pick up my book and read it is my dream. Seeing my own guest blog on this terrific sight is something I never dreamed of. So believe in your dreams. You never know what might come of them. I’m loving my Happily Ever After!

You can find Genevieve online at the following locations: